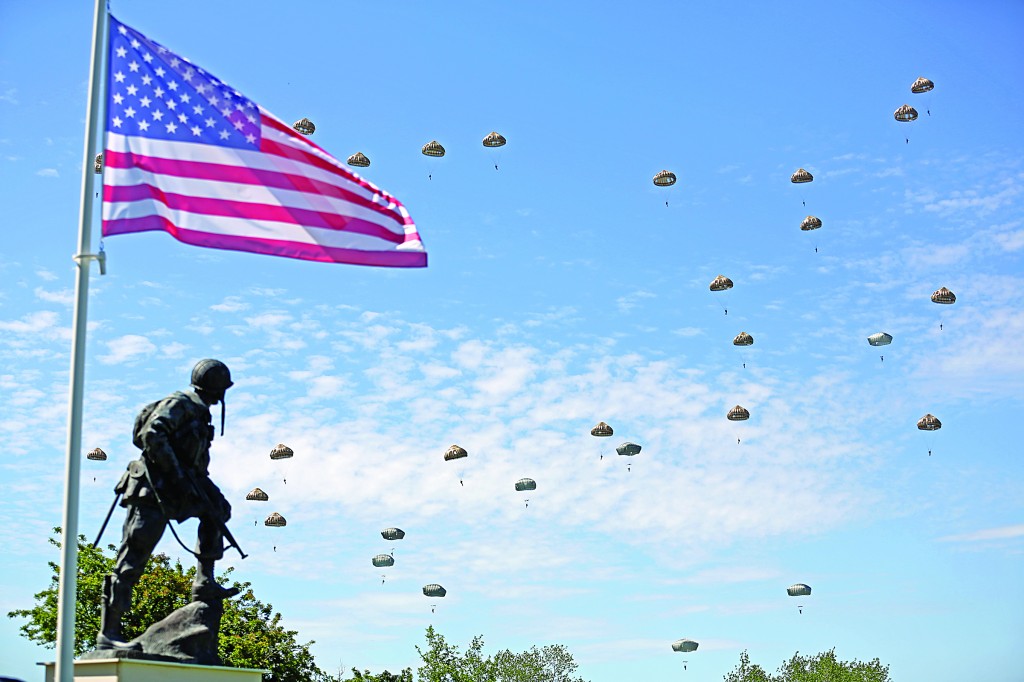 Nearly 1,000 paratroopers dropped out of the sky in Normandy on Sunday — but this time they did so in peace, instead of to wrest western France from the Nazis, as they did during World War II.

Drawing huge crowds who braved hot weather and lined the historic landing area at La Fiere, the aerial spectacle re-enacted the drama of the Normandy landings and served to cap commemorations marking the 70th anniversary of D-Day.

Among the planes ferrying paratroopers for the event was a restored C-47 U.S. military transport plane that dropped Allied troops on the village of Sainte-Mere-Eglise — a stone’s throw from La Fiere — on June 6, 1944. And the pilots who originally flew it took the controls again last week, 70 years later, remembering their experiences.

Sunday saw dozens of veterans escorted down a sandy path to a special section to watch alongside thousands of spectators. Others took shelter in the shade as the lack of wind caused the sun to beat down hard.

Veteran Julian “Bud” Rice, a C-47 pilot who participated in the airdrops of Normandy on D-Day, watched the show.

“It’s good to see 800 paratroopers jump here today, but the night that we came in, we had 800 airplanes with 10,000 paratroopers that we dropped that night, so it was a little more,” he said.

Rice flew in a C-47 aircraft earlier in the week, similar to the one he flew on D-Day. With him was veteran pilot Bill Prindible, with whom he watched the show.