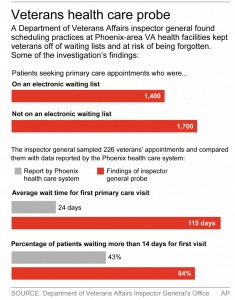 This was not in the Barack Obama playbook.

The resignation of Veterans Affairs Secretary Eric Shinseki on Friday did not follow the usual arc of a crisis in the Obama administration.

Obama prefers to not get sucked into a drama and cede in the heat of the moment. He’d rather send in fixers and have the bloodletting occur in due course.

Shinseki, however, tendered his resignation at the height of a political clamor for his departure and as revelations of systemic delays in veterans’ patient care mounted daily. Shinseki left even before the review Obama had ordered of the department’s problems was completed.

For Obama, there was little doubt that his decision to let Shinseki go was painful.

“He is a very good man,” Obama said of the former four-star Army general and Vietnam veteran. “I don’t just mean he’s an accomplished man. I don’t just mean that he’s been an outstanding soldier. He’s a good person who’s done exemplary work on our behalf.”

In this crisis, it became clear to the White House that the solution to the problems identified in news accounts and in a condemnatory report from the VA’s inspector general were endemic and would take time to turn around, let alone correct.

That’s hardly a comfort for Obama and his beleaguered White House.

Obama served on the Senate Veterans’ Affairs Committee that reviewed those inspector general studies. He ran for president in 2008 with a promise to improve the delivery of benefits for veterans. His wife has made helping veterans and their families a priority. Last week, Obama called the care of veterans “one of the causes of my presidency.”

This article appeared in print on page 3 of the June 2nd, 2014 edition of Hamodia.