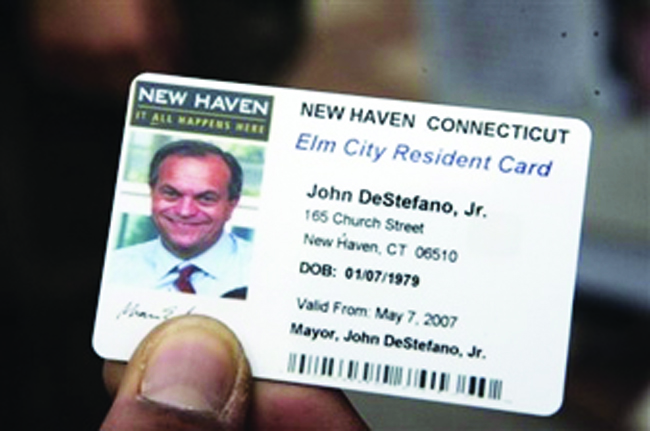 So here’s something for all those who consider themselves card-carrying New Yorkers: a card to carry.

Supporters of a plan to create a New York City municipal ID card that would help immigrants in the country illegally, the homeless and others who struggle to get government-issued identification say the program’s success depends on the ones who don’t need it getting it. Without that buy-in, proponents say, the IDs run the risk of becoming markers that stigmatize anyone who carries one.

“The broad appeal is going to be a critical piece to make sure the ID card isn’t seen as some sort of scarlet letter indicating you might be undocumented or homeless … or any of these marginalized populations,” said Deyanira Del Rio, co-director of the New Economy Project, an advocacy group that fights discriminatory economic practices. “You don’t want the ID to create any inference about someone’s status and have them mistreated as a result.”

Supporters say getting New Yorkers who already have ID to get another one means the card can’t simply be a means of identification. It has to offer more, such as incentives and discounts to quintessentially New York things, such as the cultural institutions, the Citi Bike rental program or Restaurant Week. And it must be easy to get but have enough security features and checks to make sure fraud isn’t a problem.

“This card needs to be functional, and it needs to be something that’s cool to have,” said Linda Sarsour, executive director of the Arab American Association of New York.

Legislation to create the municipal ID is making its way through the City Council. Mayor Bill de Blasio has spoken out in support of the idea, and he included $8 million in his executive budget for the creation and implementation of a card by year’s end.

The planning is still in the early stages, with no numbers yet for what the ID cards could cost or details on the logistics of where residents could get the cards.

The card’s success is vital to people like Humberto Moncada, 54, an immigrant from Colombia who is not in the country legally.

“It would be really important for me,” he said in Spanish. “I’m worried right now that I don’t have any ID that I can provide to the authorities.”