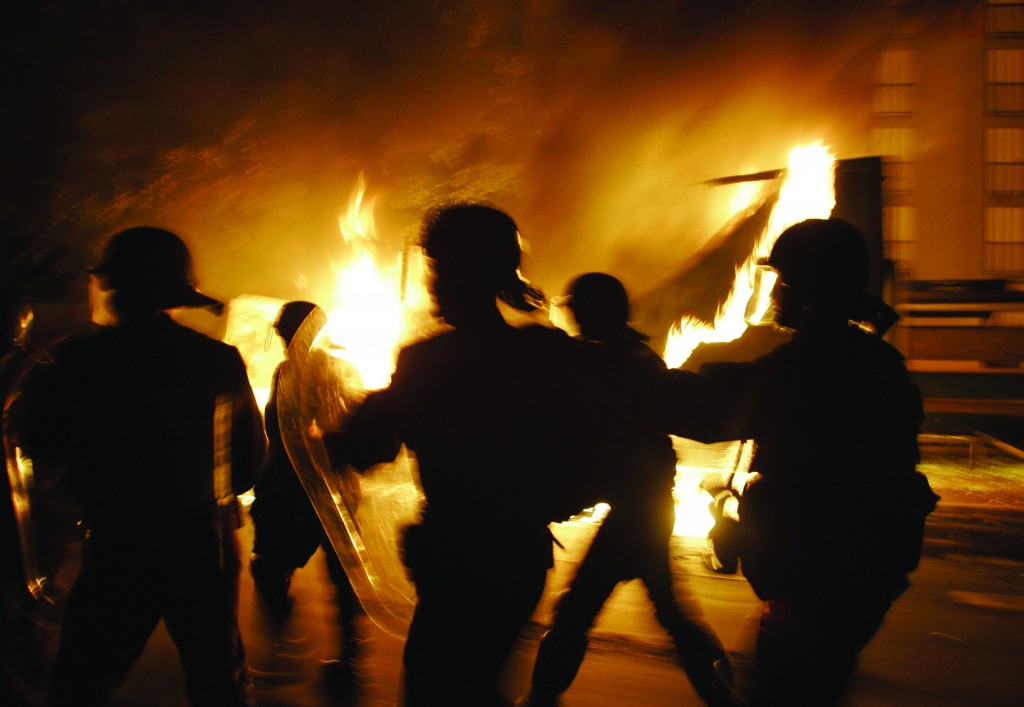 “Look to your own doorstep in France. Your own French women are abandoning their Christianity and donning the hijab and the burqa…Our eyes are on Paris…We will not stop, as Muslims, until the whole world is governed by Islam.”

– British Islamist at a demonstration outside the French Embassy in London to protest against the military campaign on January 20, 2013

“Islam could soon be the dominant force in a Europe which, in the name of political correctness, has abdicated the battle for cultural and religious control.”
– Noted Middle Eastern and Islamic scholar, Prof. Bernard Lewis; January, 2007

This past May 25, 2014 may very well go down in the annals of European political history as a date to be remembered alongside October 25, 732, when a Muslim invasion was defeated by Charles Martel at Poitiers, thereby halting Arab expansion into Western Europe.

Could the recent European Parliamentary elections, which saw an unprecedented growth in the hard-right vote, represent the populist beginnings of indigenous attempts to reclaim European, Christian identity before it is too late? Could this be the 21st century Reconquista?

To what extent was France’s far-right party, the Front National’s (FN), recent “political tsunami” only a reflection of voters’ discord with EU-headquartered Brussels? Is the increasing popularity of anti-immigrant and, notably, anti-Muslim discourse just a reflection of growing fears over economic woes, or can it be attributed to something altogether more essential: a kulturkampf pitting a resurgent and radicalized Islam with a defeated but reawakening Christendom? Will the House of Islam’s millennial dream to dominate and, at long last, incorporate their long-standing Christian rival in a worldwide Caliphate come to fruition, or are the latest election results a glimmer of a resistance that is to come?

Just over a week after the European Parliamentary elections, the growing power of the far right is undeniable. The Front National (FN), led by the charismatic Marine Le Pen, received an historic 26 percent of the vote in the European Parliamentary elections — thus giving the party 22 of France’s 74 assigned seats in the governing body — sending shockwaves across the European political scene. The headline outcome, after almost 180 million people cast their ballots, was a big surge in support for anti-immigrant, Euroskeptical, and sometimes outright racist parties of the hard right.

The Euro-chattering classes have offered many contributing factors for the hard right’s striking electoral gains that state one basic, incontestable fact: The French are fed up with their rulers. This is the accumulated effect of a range of causes, from France’s deteriorating financial situation and lessening stature in world affairs, ongoing political cronyism and monetary corruption, rising youth unemployment (3 out of 10 French citizens under the age of 30 voted for the FN) to the mounting frustration over currency policy being set by a non-elected Brussels bureaucracy perceived as high-handed and unaccountable.

While all these factors are certainly germane to the growing electoral victories of Europe’s far-right parties (there is a likely bloc of 50-60 seats that could include France’s National Front, Greece’s extremist Golden Dawn, Hungary’s Jobbik and, for the first time, a parliamentarian representing the neo-Nazi German NPD),  they do not in and of themselves identify the main impetus behind the rising trans-national European malaise. Beneath the headlines — and well known to all who have been following the situation for years — is the increasing fear and rejection of mass Muslim immigration into the Republique Francaise and its ongoing socio-cultural implications to the survival of Europe as an open, pluralistic and democratic civilization.

Although the exact numbers are contested, there are an estimated 6.5 million Muslims in France today, making it Europe’s largest Islamic community. France also boasts the largest Jewish community of approximately 500,000 in Europe.

As in much of Europe, the large majority of Muslim immigrants and their descendants have had a difficult time integrating into the comparatively open and liberal Western society and birthplace of Liberté, Égalité, Fraternité. In an incisive 2013 questionnaire, 74% of the people polled by Ipsos think that Islam is an “intolerant” religion, incompatible with the values of French society. An even more radical figure, 8 out of 10 French people think that the Muslim religion seeks “to impose its way of life on others.”

The majority of French Muslims originate largely from the former French colonial territories of the Arab Maghreb (Morocco, Tunisia, Algeria) and Francophone sub-Saharan Africa. Unlike previous generations of arriving immigrants (overwhelmingly white, Christian Europeans), large swaths of French Muslims have openly defied the established French Jacobin system of integration and acculturation. There is a growing fear in many quarters that the ongoing European retreat from a proud Western identity, coupled with unchecked immigration and massive birthrates, could, within 30 to 40 years, turn France into a Muslim-majority nation.

According to the French philosopher and essayist Alain Finkielkraut, multiculturalism and runaway Muslim immigration are responsible for the destruction of French national identity.

In a politically incorrect interview with the German newsmagazine Der Spiegel (December 6, 2012) to discuss his latest book — L’identite Malheureuse [The Unhappy Identity], Finkielkraut says European elites have consistently misrepresented multiculturalism as the model for the future. Instead, he says, “Mistrust prevails, communitarianism is rampant — parallel societies are forming that continuously distance themselves from each other.”

“Immigration used to go hand-in-hand with integration into French culture. That was the rule of the game. Many of the new arrivals no longer want to play by that rule. If the immigrants are in the majority in their neighborhoods, how can we integrate them? … Many Muslims in Europe are re-Islamizing themselves. … The left does not want to accept that there is a clash of civilizations. I wish the politicians were able to speak the truth and look reality in the face. Then, I believe, France would be capable of a true awakening — of contemplating a policy of civilization.”

The growing indigenous European attempt to reclaim its cultural and religious identity is afoot. May 25, 2014 may very well one day be commemorated as the beginning of the 21st century European Reconquista of self.