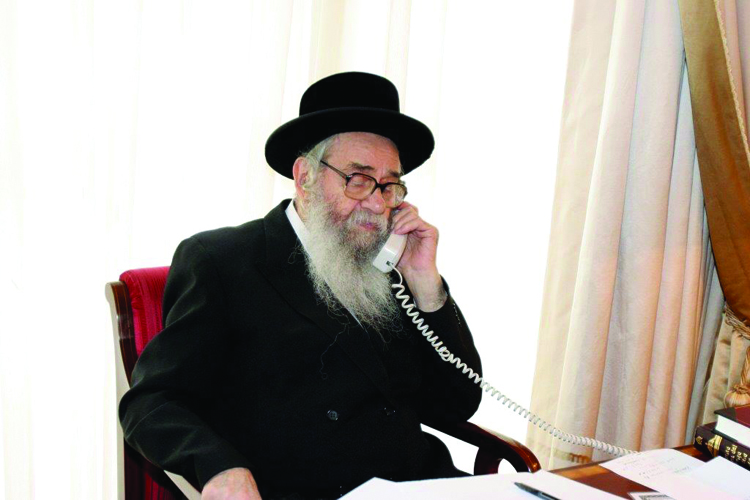 On Erev Shabbos, the village of Skver bid a mournful farewell to Reb Yeshaya Unger, z”l, who had served as gabbai to the Rebbes of Skver for 64 years. He was 89.

Reb Shaya dedicated his entire being to his position as “right hand” of the Rebbes of Skver. In all his years of service, Reb Shaya refused a salary, accepting only donations from petitioners to the Rebbe (which in the early years were very meager).

Always fully dedicated to carrying out any mission of his Rebbe, he threw himself with incredible self-sacrifice into the daunting project of building the town that would become New Square. Reb Shaya carried every detail of the Rebbe’s vision of a
shtetl in America — from raising funds to building its institutions — on his dependable shoulders. In the town’s early years he served as its sole shadchan and until 10 years ago was responsible for the sale of all housing lots — two jobs that he never accepted payment for, either.

Reb Shaya was born on 26 Cheshvan, 1925. His father was Harav Avrohom Tzvi, the Rav of Koppaver, Hungary, author of the Machneh Avraham on Mikvaos and a follower of the Minchas Elazar of Munkacz. While spending a Shabbos in the court of Harav Shayala Kerestirer, Rav Avrohom Tzvi received a bowl of cholent from Rav Shayala with a bone (in Yiddish a bein, taken as a sign that he would soon have a ben, son). A year and a half later, a son was indeed born to him. He named the child Yeshaya after the tzaddik, who had passed away several months before.

In his youth, Reb Shaya was educated mostly by his father, but often traveled to the nearby Shoproner Rav who served as a profound influence thought his life. After the war, in which he lost his parents and several siblings, he served as a sofer and menaker in the Lansberg DP camp in Germany. There he married Rebbetzin Raizel Donath, sh’tichyeh.

After settling in America, he began to draw close to the Skverer Rebbe, zy”a. When the need for a new gabbai arose, several candidates were presented. The Rebbe ended the discussion with a simple statement: “I want Shaya.”

Upon the Skverer Rebbe’s passing, Reb Shaya transitioned seamlessly to serving the present Rebbe, shlita, 14 years his junior, conducting himself with the exact same reverence and selflessness that he had for the former Rebbe.

Reb Shaya’s daily schedule was daunting. After writing kvittlach until two or three a.m., he would not lie down until learning his daily regimen of Mishnayos. Each morning he completed the entire Sefer Tehillim and called dozens of doctors to make appointments for the many individuals who came to the Rebbe with serious health issues. This task often needed to be paused for the Rebbe’s Shacharis and any brissim and “tefillin leigins” the day brought. No matter how long it took,  Reb Shaya never ate anything until every last appointment had been made.

He was known for his fierce defense of the Rebbe’s honor and for enforcing his will. At the same time, if the Rebbe had not given an opinion on a matter, he would never offer his own.

It would seem hashgachah pratis that his passing should coincide with Parashas Naso that opens by commanding Bnei Gershon, “to serve and to carry.” Reb Shaya dedicated his whole existence to serving his Rebbes and carrying the burden of their chassidim.

He is survived by his Rebbetzin, their daughters, Rebbetzin Chava Leah Eisenberger (wife of Harav Yosef Yisrael, a Dayan in New Square) and Rebbetzin Rivka Brocha Stein (wife of Harav Yitzchok Stein, a well-known marbitz Torah, presently in Beit Shemesh), as well as many grandchildren and great-grandchildren.