Dow, S&P Close Out May At Record Highs 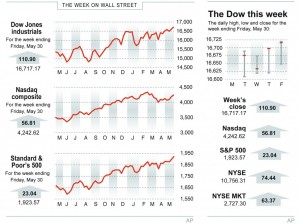 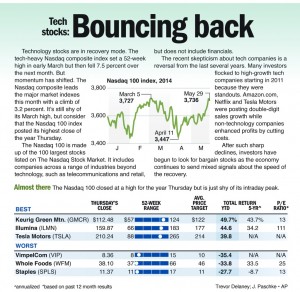 The stock market closed out May mostly higher Friday, sending two out of the three major U.S. indexes to record highs.

Trading was uneven, and indexes moved between small gains and losses for most of the day. A late push higher left the Dow Jones industrial average and Standard & Poor’s 500 at all-time highs, but just barely.

May was the best month for investors since February. The S&P rose 2.1 percent for the month, while the Dow rose 0.8 percent and the Nasdaq rose 3.1 percent.

On Friday, investors had two somewhat disappointing reports on the U.S. consumer.

“It is obvious that after an unseasonably colder January and February, consumers came out with a vengeance in March,” Chris Christopher, an economist at IHS Global Insight, wrote in a note to clients. “So, April’s poor showing on the spending front is payback for a strong March.”

In a separate report, the University of Michigan’s consumer sentiment index fell more than analysts were expecting. The index slipped to 81.9 in May from 84.9 in April. Economists had expected 82.8.

Key economic data comes out next week, including the May jobs report on Friday. Economists expect the U.S. economy created 220,000 jobs in May, and the unemployment rate fell to 6.3 percent, according to FactSet, a financial information provider. The European Central Bank will also have its interest rate policy meeting that day.

Sunglasses retailer Pacific Sunwear dropped 52 cents, or 18 percent, to $2.42. The company warned investors that it would report a two-cent loss this quarter, not the two-cent profit that analysts had expected.

The yield on the 10-year Treasury note was little changed at 2.47 percent. Bond yields are the near their lows for the year thanks to strong demand from foreign and U.S. buyers.

“If we were in a normal bond market, these yields would signal weakness in the U.S. economy,” said Randy Frederick, managing director of trading and derivatives at Charles Schwab. “But I think what’s going on is more of a temporary phenomenon.”

Roughly 3.2 billion shares traded hands on Friday on the New York Stock Exchange, slightly below the 50-day average. Volume has been relatively light this week, which was shortened by the Memorial Day holiday in the U.S. on Monday.

This article appeared in print on page 8 of the June 2nd, 2014 edition of Hamodia.