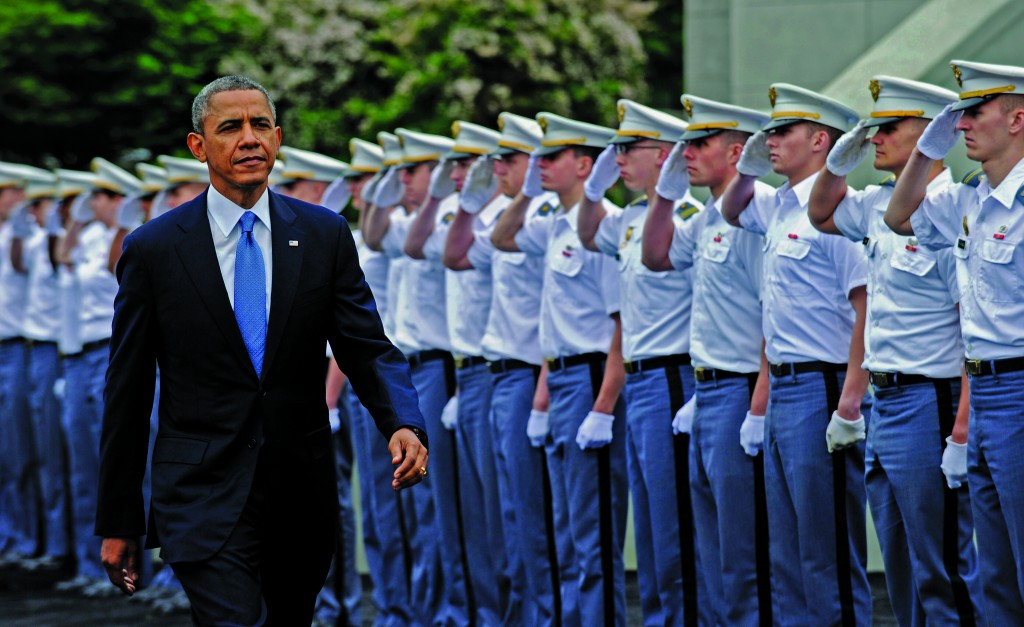 Seeking to redefine America’s foreign policy for a post-war era, President Barack Obama on Wednesday declared that the United States remains the only nation with the capacity to lead on the world stage but argued it would be a mistake to channel that power into unrestrained military adventures.

Obama’s approach, outlined in a commencement address at the

U.S. Military Academy, underscored his efforts to straddle the line between global isolation and intervention. Neither view, he said, “fully speaks to the demands of this moment.”

“It is absolutely true that in the 21st century, American isolation is not an option,” Obama said in remarks to more than 1,000 of the military’s newest officers. “But to say that we have an interest in pursuing peace and freedom beyond our borders is not to say that every problem has a military solution.”

Obama has often struggled to articulate not only what should fill the space between intervention and isolation but also any success the administration has had in finding that middle ground. His preferred tool kit, which includes economic sanctions, diplomatic negotiations and international coalition building, rarely generates quick fixes and is often more ambiguous than more easily explained military action.

The president’s strategy also has garnered mixed results. While diplomacy and sanctions have brought the U.S. and Iran closer to a nuclear accord than ever before, neither approach has stopped the bloodshed of Syria’s four-year civil war or prevented Russia from annexing territory from Ukraine.

The result at home has been a drumbeat of criticism from Republicans and others who say the president has squandered America’s global leadership and emboldened foes in Syria and Russia, as well as China. The public’s approval of his foreign policy has declined, even as his policies hew with Americans’ stated opposition to more military conflicts.

Obama’s speech on Wednesday was part of concerted White House effort to answer critics and more clearly define his foreign policy philosophy. He outlined plans to seek approval from Congress for $5 billion that could be used to help countries fighting terrorism, foreshadowed a more robust U.S. military program to train and equip vetted Syrian rebels and declared that seeking international consensus through the U.N. or NATO is an example of American leadership, not weakness.

The president vigorously defended his belief that unilateral military action should be reserved for instances where core national interests are challenged or the public’s safety is in jeopardy.

He told the graduating cadets: “I would betray my duty to you, and to the country we love, if I sent you into harm’s way simply because I saw a problem somewhere in the world that needed fixing, or because I was worried about critics who think military intervention is the only way for America to avoid looking weak.”

Obama’s speech came one day after he unveiled plans for ending the Afghan war by 2016, ending a conflict that started in the weeks after the Sept. 11, 2001, terror attacks. He was cheered by his commencement audience when he noted that the cadets were “the first class to graduate since 9/11 who may not be sent into combat in Iraq or Afghanistan.”

Obama said terrorism remains the most direct threat to U.S. security, though the risks of a attack on the homeland from a centralized al-Qaida have taken a backseat to more diffuse threats from an array of affiliate groups.

As the threat changes, so too must America’s response, Obama said. Instead of large-scale military efforts, he called for partnering with countries where terrorist networks seek a foothold, including Yemen, Libya and Mali. In Afghanistan as well, the U.S. will stress counterterrorism missions in the final two years of the U.S. mission.