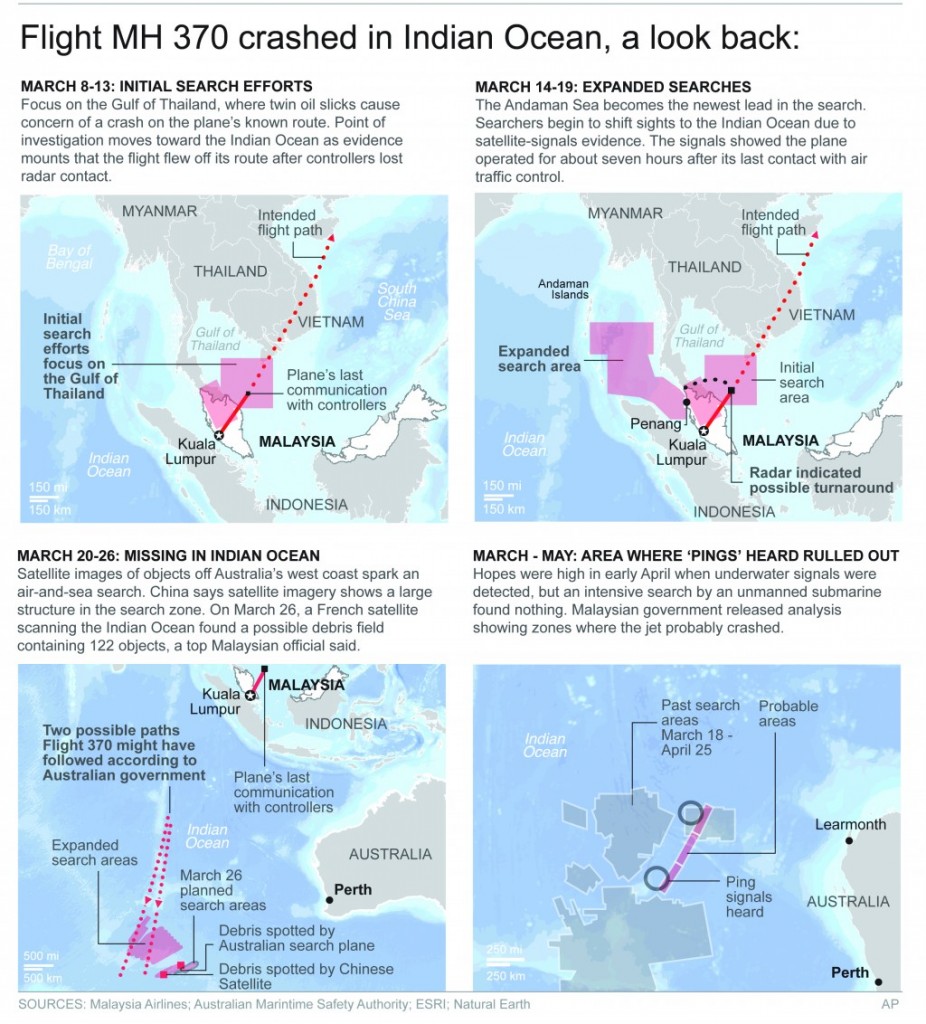 The case of Malaysia Airlines Flight 370 became ever more mysterious Thursday as Australia claimed that the missing airliner is not in the more than 300-square-mile patch of ocean where authorities have been searching since early April.

The admission came after a U.S. Navy official disclosed that the four “pings” once described as the most promising clues to the plane’s supposed location in the southern Indian Ocean most likely did not come from the plane’s black boxes.

“I wouldn’t say we are back to square one, but maybe to square one-and-a-half,” said Ron Bishop, an Australian search-and-rescue expert and head of aviation at Central Queensland University.

The flight disappeared March 8 on its way from Kuala Lumpur  to Beijing with 239 people aboard. Between April 5 and April 8, officials announced that an Australian ship equipped with
a U.S.-made towed pinger locator had detected four signals that matched the frequency of the missing Boeing 777’s black boxes.

But the U.S. Navy’s deputy director of ocean engineers, Michael Dean, said in an interview late Wednesday with CNN that the pings probably didn’t come from the plane.

“Our best theory at this point is that (the pings were) likely some sound produced by the ship,” he was quoted telling CNN.

“To a family member, it is good news that the plane is not under the water of the Indian Ocean … the hope has come back,” said Sarah Bajc, an American teacher working in Beijing whose partner, Philip Wood, was one of the passengers.

One of the most vocal of the passengers’ relatives, Bajc said that the initial announcement that signals had been detected from the plane struck many family members as too convenient.

“Wow, the first time the ping tracers went into the water they find the ping, like it is magical,” Bajc said.

The setback is an embarrassment for Australia, which has been leading the search. During a visit to China last month, Australian Prime Minister Tony Abbott told reporters, “We are confident that we know the position of the black box flight recorder to within some kilometers.”

But after weeks of scouring the Indian Ocean without finding a single confirmed piece of debris, many scientists began to question the claim of locating the black boxes, saying that the signals could have emanated from pinger transmitters used by marine biologists to track ocean animals or from the ship itself.

Aviation experts have also questioned Inmarsat, the British satellite company, which, based on an analysis of automated communications between the plane’s engine and a satellite, concluded that the plane crashed into the southern Indian Ocean, mostly likely after running out of fuel. Inmarsat released its raw data earlier this week in order to bolster its conclusions.

Some critics have called for search efforts to resume elsewhere, particularly along a northern corridor toward central Asia, which was initially identified a possible route after the plane deviated from its usual course.

“It could be in the Northern Hemisphere, maybe someplace not very populated on land. It could still be in the water somewhere, just in a different place,” said aviation expert Bishop.

The Australian coordinating agency said in its statement Thursday that search efforts will expand to 23,000 square miles along the arc defined by Inmarsat.