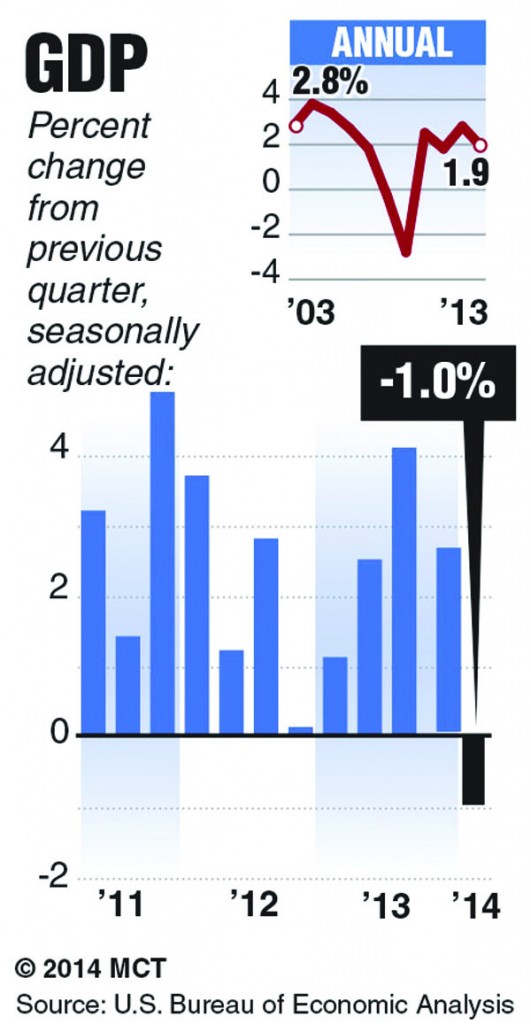 The economy performed worse than initially estimated amid severe winter weather in the first three months of the year, contracting for the first time in three years, the Commerce Department said Thursday.

The nation’s total economic output decreased at a 1 percent annual rate from January through March, down significantly from the government’s first estimate of weak, but positive, 0.1 percent growth for the period.

Recent data indicate that the recovery has picked up this spring.

But the new report shows just how bad things were during the winter and how much ground the economy has to make up to hit the 3 percent overall growth for 2014 that economists had been hoping for.

“The U.S. recovery took a backward step in the first
quarter, most likely the result of many parts of the country having been battered by extreme weather at the start of the year,” said Chris Williamson, chief economist at Markit, a financial information firm.

“However, current indicators suggest this was merely a temporary setback in an otherwise ongoing robust recovery, pointing to a strong rebound in the second quarter,” he said.

Bitter cold and heavier-than-normal snowfall in much of the country led economists to anticipate a drop in output in the first quarter. Analysts expected the government’s first estimate, released last month, would be revised down on Thursday.

But the falloff was greater than anticipated. The consensus among economists was that the economy contracted at a 0.5 percent annual rate in the first quarter.

Driving the first-quarter drop in economic output was a larger decline in business investment in inventories than originally estimated.

Consumer spending stayed about the same as in the first estimate last month, but the 3.1 percent increase was down from 3.3 percent in the fourth quarter of the year.

The economy expanded at a 2.6 percent annual rate in the fourth quarter. The last time output, also known as gross domestic product, contracted was in the first quarter of 2011, when growth was -1.3 percent.

The first-quarter drop in output was just the second time since the Great Recession ended in June 2009 that the economy contracted. A recession normally is considered two consecutive quarters of negative output.