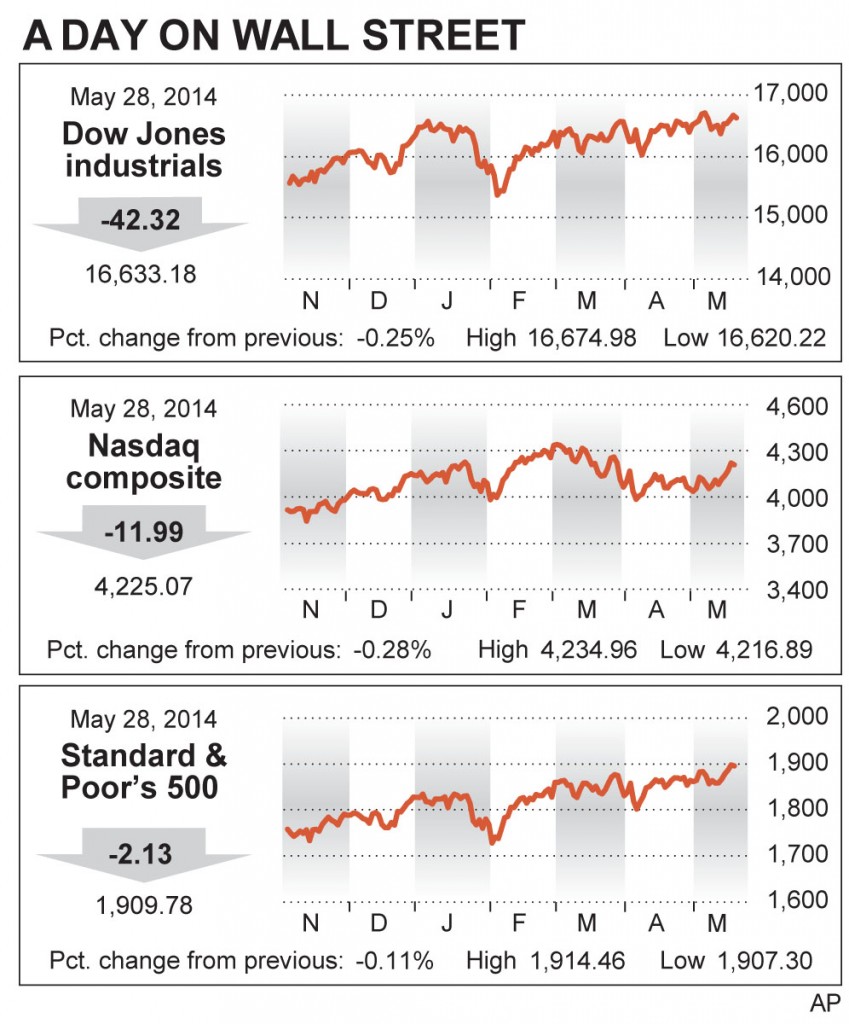 Stocks edged lower for the first time in five days Wednesday, but the real action was in the bond market.

The yield on the 10-year Treasury note fell to its lowest in 11 months as investors continued to put money into the bond market, extending a rally that has taken many investors and analysts by surprise. Most market participants had expected yields to climb this year, and bond prices to fall, as the Federal Reserve reduced its purchases of bonds and the economy improved.

Instead, the opposite has happened. While stocks have ground out modest gains this year, pushing major indexes to record levels, bond prices have surged. Even evidence that the economy is strengthening after a winter lull has failed to slow the rally.

“The bond market has been incredibly resilient,” said Russ Koesterich, chief investment strategist with BlackRock. “Even as stocks have pushed to new highs, and you’ve had generally positive economic data, bonds have remained well bid.”

As bonds rallied, investors bid up the prices of safe and steady stocks like utilities and phone companies that pay rich dividends, giving a lift to major stock indexes. Utility and phone company stocks were the best performers in the S&P 500. The utility sector is the year’s best performer of the 10 sectors that make up the S&P 500, gaining 10.7 percent since the start of 2014.

In other stock trading, Dollar General led consumer discretionary stocks lower after analysts at Deutsche Bank cut their forecast for the company’s earnings, saying that it faces tough pricing competition from rival retailers, including Walmart and Target. The retailer’s stock dropped $1.70, or 3 percent, to $54.60.

The stock market has edged up to record levels against a backdrop of reports that have shown the U.S. economy is gradually strengthening after a winter slump. The S&P 500 closed above 1,900 for the first time on Friday.

But despite the encouraging economic backdrop, bonds have continued to rally.

On Wednesday, the yield on the 10-year Treasury note fell to 2.44 percent from 2.52 percent late Tuesday. The yield, which started the year at 3 percent, is the lowest it’s been in 11 months.

Speculation that the European Central Bank will take further steps to stimulate the region’s economy have boosted the appeal of U.S. Treasury notes compared to bonds issued by the European governments. The yield on the 10-year German government bond is 1.34 percent, and French bonds with a similar maturity yield 1.72 percent.

Some analysts also say that the Chinese government is buying the U.S. government debt as a way of weakening its currency to help make its own exports cheaper.