ANALYSIS: The CEO Got a Huge Raise and You Didn’t; Here’s Why 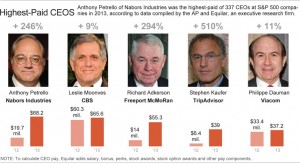 Pay for globe-trotting CEOs has soared to new heights, even as most workers remain grounded by paychecks that are barely budging.

While pay for the typical CEO of a company in the Standard & Poor’s 500 stock index surged 8.8 percent last year to $10.5 million, it rose a scant 1.3 percent for U.S. workers as a whole. That CEO now earns 257 times the national average, up from a multiple of 181 in 2009, according to an analysis by The Associated Press and Equilar.

Those figures help reveal a widening gap between the ultra-wealthy and ordinary workers around the world. That gap has fed concerns about economic security — everywhere from large cities where rents are high to small towns where jobs are scarce.

Here are five reasons why CEOs are enjoying lavish pay increases and five reasons many people are stuck with stagnant incomes.

WHY CEOs ARE GETTING HUGE RAISES

Unlike most workers, chief executives receive much of their compensation in the form of company stock — a lot of it. The theory behind compensating CEOs this way is that it aligns the interests of senior management with those of shareholders, which would seem beneficial for a company.

Yet accounting scandals of the early 2000s showed that some executives gamed the system, ultimately at shareholder expense. Executives at firms such as Tyco and Enron tinkered with the books to boost corporate incomes, share prices and the fortunes of insiders and senior managers.

Still, the bonanza continues. The average value of stock awarded to CEOs surged 17 percent last year to $4.5 million, the largest increase ever recorded by the AP. Remember, too: Long-term gains on stocks are taxed at lower rates than ordinary pay is.

The S&P 500 jumped 30 percent last year, compounding the size of the CEOs’ paydays. Consider Leslie Moonves of CBS, whose stock climbed at twice the rate of the overall stock market. Moonves collected $65.6 million.

The stock rally has been fueled in part by historically low interest rates engineered by the Federal Reserve. Those rates led many investors to shift money out of low-yielding bonds and into stocks.

Robert Solow, a Nobel Prize-winning economist, recently observed that CEOs live in “Lake Wobegon,” that fabled town created by radio show host Garrison Keillor where, it is said, “all the children are above average.” Solow didn’t mean it as a compliment.

Corporate boards often set CEO pay based on what the leaders of other companies make. No board wants an “average” CEO. So boards tend to want to pay their own CEO more than rival CEOs who are chosen for benchmarking compensation packages.

This will “naturally create an upward bias” in pay, Charles Elson and Craig Ferrere of the University of Delaware concluded in a 2012 paper. “(T)he compounded effect has been to create a significant disparity between the pay of executives and what is appropriate to the companies they run.”

Companies often portray their CEOs as the business equivalents of superstar athletes who command (and deserve) enormous pay for their performance and ability to draw crowds.

The era of digital communication and private jets has given leading athletes, entertainers and business people the global reach to generate outsized profits. The late University of Chicago economist Sherwin Rosen theorized that this phenomenon would concentrate more income with the top players. As corporate giants compete around the world, the drive to procure corporate superstars has helped inflate CEO pay.

Some board members defer to a CEO’s judgment on what his or her own compensation should be. There’s a good reason: Many boards are composed of current and former CEOs at other companies. And in some cases, board members are essentially hand-picked or at least vetted by the CEO. Not surprisingly, the boards’ compensation committees offer generous bonuses.

Even companies with vigilant boards and an emphasis on objectively assessing CEO performance might shower their chief executives with money. When a CEO faces more scrutiny and a greater chance of dismissal, the companies often raise pay to compensate for the risk of job loss, according to a 2005 article by Benjamin Hermalin, a professor at the University of California, Berkeley.

WHY MANY OF US AREN’T GETTING A RAISE

Millions of factory workers have lost their spots on assembly lines to machines. Offices need fewer secretaries and bookkeepers in the digital era.

Robots and computers are displacing jobs that involve routine tasks, according to research by David Autor, an economist at Massachusetts Institute of Technology. As these middle-income positions vanish, workers are struggling to find new occupations that pay as much. Some must settle for low-paying retail and food-service jobs.

College tends to substantially improve people’s earnings power compared with workers who have completed only high school. But even workers who have attended college have been hurt by the loss of middle-income jobs.

Nearly 45 percent of U.S. workers who earned less than $10.10 an hour last year had either attended college or had graduated, according to an analysis by John Schmitt, a senior economist at the liberal Center for Economic and Policy Research.

The aftermath of the Great Recession left a glut of available workers. Businesses face less pressure to give meaningful raises when a ready supply of job seekers is available. They’re less fearful that their best employees will defect to another employer.

The current 6.3 percent unemployment rate, down from 10 percent in October 2009, isn’t so low that employers will spend more to hire and keep workers. Wages grew in the late 1990s when unemployment dipped to 4 percent, a level that made high-quality workers scarce and compelled businesses to raise pay.

Companies can cap wages by offshoring jobs to poorer countries, where workers, on average, earn less than the poorest Americans. Consider China: A typical Chinese factory employee made $1.74 an hour in 2009, according to the Bureau of Labor Statistics — roughly a tenth of what their U.S. counterpart made.

Some analysts say this decades-long trend may have peaked. But many economists say the need for the United States to compete with a vast supply of cheap labor worldwide continues to exert a depressive effect on U.S. workers’ pay.

Organized labor no longer commands the heft it once did. More than 20 percent of U.S. workers were unionized in 1983, compared with 11.3 percent last year, according to the Bureau of Labor Statistics. That has drastically reduced the unions’ sphere of influence. Result: Fewer workers can collectively negotiate for raises.

For the past five years, the government’s standard inflation gauge, the consumer price index, has averaged an ultra-low 1.6 percent. When inflation is high, employees tend to factor it into requested pay raises. But when inflation is as low as it has been, it almost disappears as a factor in pay negotiations. Workers typically settle for less than if inflation were higher.

This article appeared in print in the May 29th, 2014 edition of Hamodia.