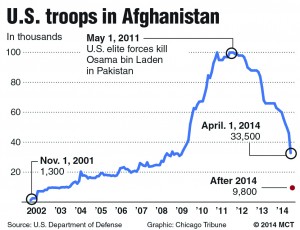 Seeking to turn the page on more than a decade of war, President Barack Obama announced plans Tuesday for greatly reducing U.S. forces in Afghanistan by the end of the year and then ending the U.S. military commitment by the end of 2016.

“We have now been in Afghanistan longer than many Americans expected,” Obama acknowledged during an appearance in the White House Rose Garden. “Now we’re finishing the job we’ve started.”

He said American forces have struck significant blows against al-Qaida’s leadership, eliminated Osama bin Laden and prevented Afghanistan from being used as a base against the U.S.

Even as Obama set a timetable for the drawdown, he said he would keep nearly 10,000 American troops in Afghanistan after the U.S. combat mission formally ends later this year. Those troops would focus on training Afghan security forces and on counterterrorism efforts.

The president said his plan was contingent on the Afghan government signing a bilateral security agreement with the U.S. Afghan President Hamid Karzai has refused to sign the accord, but the U.S. is optimistic that the two candidates seeking to replace him in the ongoing Afghan elections will finalize the agreement. Both have pledged to sign it.

Obama’s blueprint calls for cutting the current U.S. force of 32,000 to 9,800 by the start of next year. Those troops, dispatched throughout Afghanistan, would not be engaged in combat missions.

Over the course of 2015, the number of troops would be cut in half and consolidated in the capital of Kabul and at Bagram Air Field, the main U.S. base in Afghanistan. Those remaining forces would largely be withdrawn by the end of 2016, with fewer than 1,000 remaining behind to staff a security office in Kabul.

Noting the complexity of his drawdown plan, Obama said, “It’s harder to end wars than to begin them.”

Obama’s decision is largely in line with what military commanders have been seeking and will allow the president to fully end the American-led military effort by the time he leaves office in January 2017.

The American forces would probably be bolstered by a few thousand NATO troops. The total NATO presence, including U.S. troops, is expected to be around 12,000 at the start of next year.

Obama announced the drawdown plan a day after returning from a surprise weekend trip to Afghanistan where he met with U.S. commanders and American forces serving in the closing months of America’s longest war.

Top Republicans criticized the plan before Obama had even announced it, taking issue with his decision to publicly declare that troops would be out of Afghanistan after 2016.

House Armed Services Committee Chairman Howard “Buck” McKeon (R-Calif.) praised Obama’s troop levels but questioned his timing and said that in Iraq he had “abandoned the region to chaos.”

“Holding this mission to an arbitrary egg-timer doesn’t make a lick of sense strategically,” McKeon said.

Ahead of his remarks, Obama spoke with Karzai, who has had a tumultuous relationship with the White House. The two leaders did not see each other while Obama was in Afghanistan this weekend, but they did speak by phone as Air Force One was returning to Washington.

This article appeared in print on page 3 of the May 28th, 2014 edition of Hamodia.