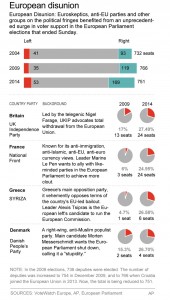 With far-right, anti-EU parties sweeping to unprecedented victories in France, Britain and Denmark and populists gaining ground elsewhere, the 28 leaders faced tough questions about the future direction of European integration.

Arriving for an informal summit, they sought to avoid an immediate fight over whether Jean-Claude Juncker, the candidate of center-right parties that topped the poll, should be nominated as European Commission president, as parliament wants.

Several leaders said they would focus on policies before personalities, giving European Council President Herman Van Rompuy a mandate to conduct negotiations on the agenda and leadership of the next EU executive.

Drawing initial lessons from a bruising election, which handed a quarter of all parliament seats to anti-EU or protest parties, several leaders said they would seek ways to reorient the EU’s work to make it more relevant to citizens.

“The first thing we have to do is to formulate an answer,” said Dutch Prime Minister Mark Rutte, whose liberal party came fourth, one place behind the anti-Islam Freedom Party, in the Netherlands.

“As far as I’m concerned, that answer contains fewer rules and less fuss from Europe, and focusing Europe on where it can add value to things,” he said.

“The European Union cannot just shrug off these results and carry on as before,” he said. “We need change. We need an approach that recognizes that Europe should concentrate on what matters, on growth and jobs, and not try to do so much.”