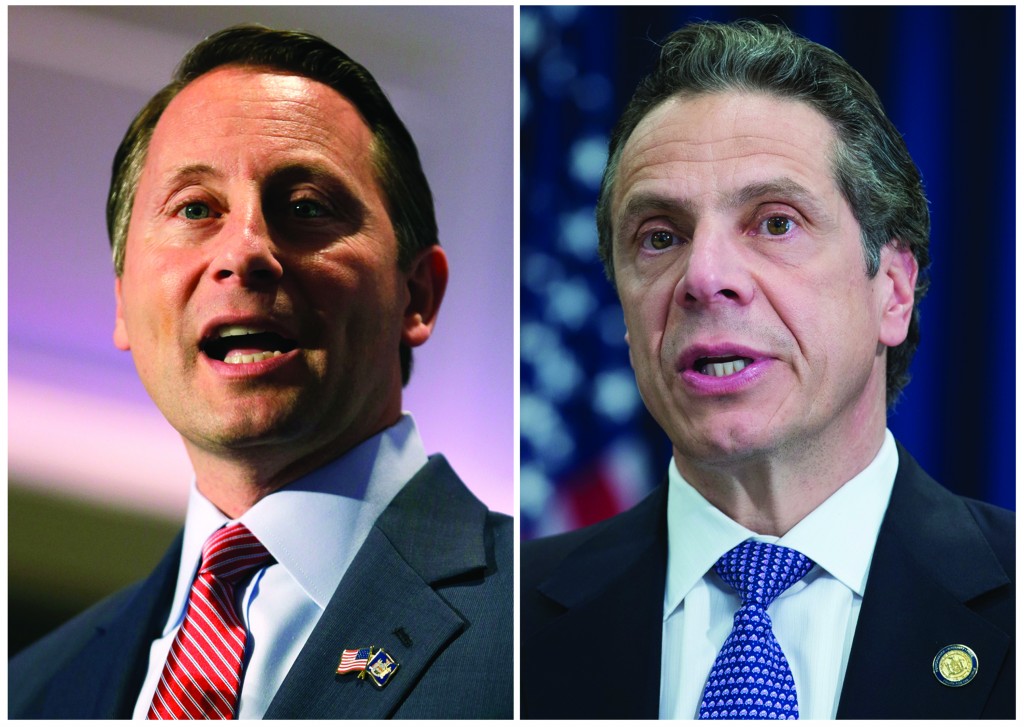 Gov. Andrew Cuomo and his Republican challenger, Rob Astorino, have emerged from their parties’ conventions with sharply different visions of the state they want to lead, with one celebrating liberal policies and a rebounding economy and the other warning of a state on the brink.

The competing narratives are likely to define the race between Cuomo — a confident front-runner widely believed to be eyeing national office — and Astorino, the Westchester County executive with cross-party appeal who hopes to give the GOP its first statewide victory in New York since 2002.

Republicans insist their chances for victory are better than they have been in years. Astorino has twice won election in a county dominated by Democrats. They predict he will pick off moderate Democrats and independent voters that cast ballots for Cuomo in 2010, when the Republican challenger was conservative Buffalo businessman Carl Paladino.

Cuomo is far ahead in polls and in fundraising, and surveys show Astorino isn’t well known among many voters. Astorino said he knows he has an uphill climb. His daily schedule is regularly packed with events throughout the state, and Republicans plan to aggressively court donors.

The conventions over the past two weeks were in many ways a tale of two very different Hiltons. Both parties selected Hilton Hotels in affluent, suburban New York City — the Democrats on Long Island, the Republicans in Astorino’s own Westchester County, which is also Cuomo’s hometown. While the settings were similar, the differences in rhetoric couldn’t have been more different.

Republicans talked of a state in decline, where taxes and government corruption were stifling business and individual freedoms. They hailed the economic potential of hydraulic fracturing for natural gas and condemned Cuomo’s gun control law as an unconstitutional overreach. Astorino, who switched from English to Spanish in his acceptance speech, said many New Yorkers are fed up with Albany insiders.

“It is nothing less than a disgrace, a crime of historic magnitude,” he said. “If Henry Hudson and Giovanni da Verrazzano pulled into New York Harbor today, they’d turn their ships around and head south. Because what they’d see is the word ‘closed’: closed for business; closed for innovation; closed for honest, responsible government.”

“This choice is really not about two people. It’s not even about two parties,” Cuomo said Thursday. “Their view is an ultraconservative social agenda that sees society through a lens of fear and division.”

For Astorino to win, he’ll need to mobilize his party while securing a large chunk of independent and Democratic voters. Upstate New York and Long Island are critical areas for him, according to Robert Shapiro, a political scientist at Columbia University.

“Astorino needs a big margin of victory outside New York City,” he said. “Cuomo doesn’t necessarily have to win in upstate New York, but he will want to minimize any losses there.”

For Cuomo, who is widely believed to have national political ambitions, it’s about maximizing the margin of victory — and making sure he keeps liberals in the fold. Praise from liberal stalwarts like de Blasio is likely to help.

“He has a big incentive to win big,” Shapiro said, who said the fall election amounts to a referendum on Cuomo. “He needs to show he’s got a strong base of support.”