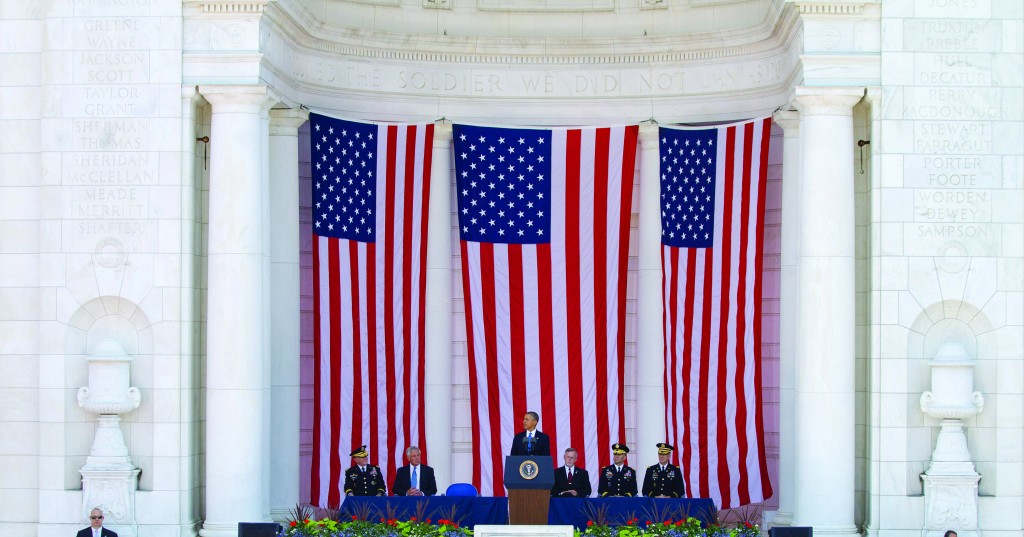 President Barack Obama led the nation in commemorating Memorial Day, declaring the United States has reached “a pivotal moment” in Afghanistan with the end of war approaching.

Obama, who returned just hours earlier from a surprise visit with U.S. troops at Bagram Air Field in Afghanistan, paid tribute to those lost in battle there and elsewhere over history. He called them “patriots who made the ultimate sacrifice” for their country.

“Early this morning, I returned from Afghanistan,” Obama told the audience of several thousand people. “Yesterday, I visited with some of our men and women serving there — 7,000 miles from home. For more than 12 years, men and women like those I met with have borne the burden of our nation’s security. Now, because of their profound sacrifice, because of the progress they have made, we’re at a pivotal moment.”

“Our troops are coming home. By the end of this year, our war in Afghanistan will finally come to end,” the president said to applause. “And yesterday at Bagram, and here today at Arlington, we pay tribute to the nearly 2,200 American patriots who’ve made the ultimate sacrifice in Afghanistan. We will honor them, always.” Obama has said it was likely that a small contingent of U.S. forces would stay behind for counterterrorism missions, as well as to train Afghan security forces.

The president made a fleeting reference to the widening scandal involving reports of poor performance by the Department of Veterans Affairs, which is facing allegations of delayed treatments, and even deaths in Arizona.

“As we’ve been reminded in recent days — we must do more to keep faith with our veterans and their families, and ensure they get the care and benefits and opportunities that they’ve earned and that they deserve,” said the president.

“These Americans have done their duty,” Obama said. “They ask nothing more than that our country does ours — now and for decades to come,” he added, drawing more applause.

Veterans Affairs Secretary Eric Shinseki, a retired Army general, was among those attending the ceremony. Lawmakers from both parties have pressed for policy changes and better management at the department.

The Arlington remembrance was duplicated in villages, towns, cities and counties across the country. There was a holiday weekend reunion of some of the last surviving members of the Tuskegee Airmen in upstate New York. More than 3,000 volunteers placed flags at the graves of 120,000 veterans at the Florida National Cemetery. And in Mississippi, the annual Vicksburg Memorial Day parade was being accompanied by a wreath-laying ceremony at Vicksburg National Cemetery.

Preceding Obama to the microphone, Defense Secretary Chuck Hagel, himself a military veteran, noted this year’s remembrance came with the approaching 70th anniversary of America’s D-Day landing in Normandy, France. And Gen. Martin Dempsey, chairman of the Joint Chiefs of Staff, said “America’s sons and daughters are still out there today on the frontiers of our common defense.”