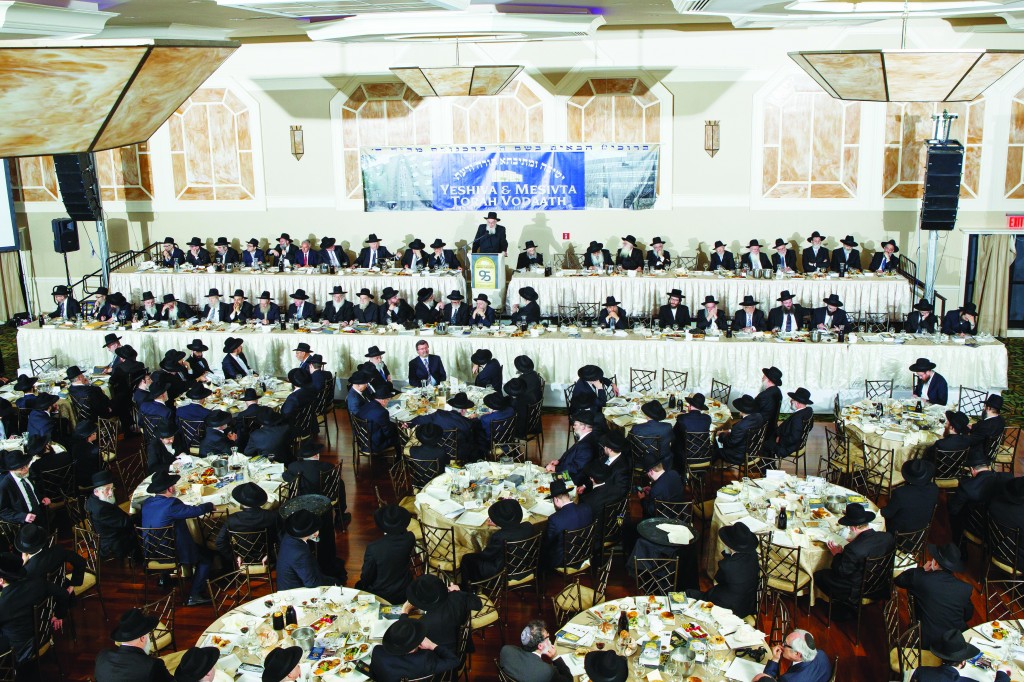 From 6,000 miles away, a million-dollar donation prompted a minutes-long ovation when it was announced at the Yeshivah Torah Vodaath dinner on Sunday evening.

At the yeshivah’s 95th annual dinner, held at the Palace in Midwood, Shlomo Yehudah Rechnitz’s promise to match the $1 million raised for the event was greeted by the approximately 1,000 assembled with a standing ovation, followed by minutes of rousing song.

The highlight of the event, titled The Reb Yissocher Hasenfeld, z”l, Memorial Dinner after the unforgettable philanthropist whose first yahrtzeit is Tuesday, came when Rabbi Yitzchok Gottdiener, the yeshivah’s executive director, approached the podium to introduce the speakers.

Rabbi Gottdiener said that this past Friday he “got the call that is the dream of every executive director around the globe. The man who is a gaon in giving, Reb Shomo Yehuda Rechnitz, was calling me to find out how the dinner was progressing.”

At the end of the discussion, Mr. Rechnitz said, “I want people to understand that when you believe in a yeshivah or a cause, you have to strain yourself and do more. So after hearing from you that this year Yeshivah and Mesivta Torah Vodaath has raised … commitments of $1 million, my wife Tamar and I, lichvod the Rosh Hayeshivah, Harav Belsky, will, iy”H, match the current year commitments of this dinner by giving … a gift of one million dollars.”

Harav Moshe Wolfson, shlita, the longtime Mashgiach of Torah Vodaath, ended the program with an enthralling history of the yeshivah, including a tribute to his great Rebbi, Harav Shraga Feivel Mendlowitz, zt”l, in memory of Mr. Hasenfeld.

“The person who accomplished so much, he himself led [the yeshivah] with simplicity,” said Harav Wolfson, who is Rav of Beis Medrash Emunas Yisroel in Boro Park. “He … wanted that he should not be called ‘Harav Mendlowitz’ [but] Mister Mendlowitz. By him, ‘Mister’ was a respected title. Why? He wanted to establish a yeshivah of misters.”

Pointedly referring to Reb Yissocher as “Mister Hasenfeld,” Harav Wolfson said that he was the symbol of the talmidim Reb Shraga Feivel wanted to produce.

“One mister understood another mister,” Harav Wolfson declared. “And as the Ponovezher Rav [zt”l] said at his hesped [of Reb Shraga Feivel], he was a ‘nistar (hidden).’ Nistar Mendlowitz. And Reb Avraham Yissocher was like that as well.”

Dinner chairman Rabbi Gedaliah Weinberger recalled how a few years ago they weren’t sure if milk companies would deliver, since bills were unpaid.

“Baruch Hashem, things are so different,” he said. “Torah Vodaath is not just surviving, it is thriving!”