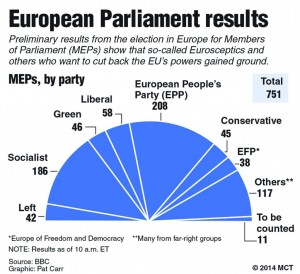 Euroskeptics celebrated across the continent on Monday, from Britain to France and beyond, over their unmatched success in the European Parliament election. Now they are keen to put up internal borders again, keep foreigners out of their labor markets, abolish the common euro currency and let their nations go it alone in a globalized world.

The 28 European Union leaders meeting in Tuesday’s postelection summit have a different task: making sure the surge of anti-EU and anti-establishment parties that claimed almost 30 percent of the EU’s 751-seat legislature doesn’t dislodge the 64-year project of closer cooperation between European nations.

They will also need to look for a way to reconnect with an ever more disenchanted European electorate that stayed away from the polls in massive numbers —and cast plenty of protest votes when they did show up.Trust in political leadership “is going down dramatically,” EU Commission President Jose Manuel Barroso acknowledged Monday in Sintra, Portugal.

British Prime Minister David Cameron, faced with the rise of the Euroskeptic UK Independence Party at home, struck a similar note, saying nothing will be business-as-usual any more.

“People are deeply disillusioned with the European Union,” Cameron said Monday after Nigel Farage’s UKIP came out on top in Britain and was slated to win 24 EU seats, compared to 19 for Cameron’s Conservatives.

The British leader who has been calling on the EU to drastically reform its ways and institutions to give member nations more space to run their own affairs will be a key figure at Tuesday’s summit.

Voters “want change and as far as I am concerned that message is completely received and understood,” Cameron said.

Yet he will find it tough going against many continental EU leaders and the EU leadership itself. And as it is so often, France came to a totally different conclusion when assessing Europe.

“I am convinced that Europe can be reoriented” to combat the rise of populism, said French Prime Minister Manuel Valls, arguing that common EU policies are something to strive for.

“The policy is noble,” he said. “Europe remains a magnificent project.”

One of the most significant victors Sunday was France’s far-right National Front party led by Marine Le Pen, the outright winner in France with 26 percent of the vote and 22 of France’s 74 seats. One analyst said a politically divided France was bad for all of Europe.

“The most worrisome result is the one with respect to France and the major win of Marine Le Pen,” said Janis A. Emmanouilidis, senior policy analyst at European Policy Center think tank. “The question is, what effect does that have on an already weak president, a weak government and what kind of negative repercussions that has on the EU policymaking? Because having a weak France is no good news.”

Instead of giving power back to member states, the outgoing EU Commission President Jose Manuel Barroso said there were still enough political parties in the legislature that “share a fundamental consensus for Europe that should now be reinforced.”

About two-third of the seats will remain in the hands of parties that have led the European Union to what it has become to date.

With such opposing views coming into Tuesday’s summit, no quick results are expected on who should be picked as Barroso’s successor. The EU Commission has the right to propose legislation, making its presidency a key job.

This article appeared in print on page 3 of the May 27th, 2014 edition of Hamodia.