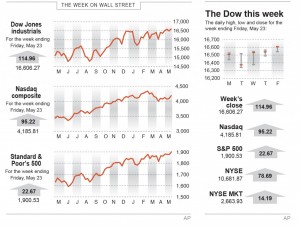 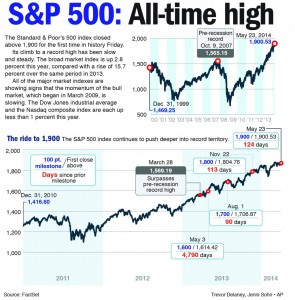 Call it the Great Slog.

Stocks are bumbling along this year after a gangbuster 2013.

The upward grind is underscored by the Standard & Poor’s 500 index, which closed above 1,900 for the first time on Friday. The index has eked out a gain of 2.8 percent this year compared with a 16 percent increase over the same period last year.

Other major indexes haven’t fared any better. The Dow Jones industrial average and the Nasdaq composite are barely positive for 2014.

The market’s five-year bull run has slowed as investors become more evenly split between those that remain optimistic on the outlook for stocks and the economy, and those that think it’s time for a sell-off. Investors haven’t seen a “correction,” Wall Street-speak for a drop of 10 percent of more, for an unusually long time.

“People have been waiting for this huge correction, but as soon as we have even a little bit of a pullback, people see the value in it, and they’re jumping in,” said Karyn Cavanaugh, senior market strategist at Voya Investment Management.

Cavanaugh believes that there will be a “spring snapback,” in the economy. Company earnings, already at record levels, will keep climbing and support stock prices.

The Commerce Department reported that sales of U.S. new homes rose 6.4 percent in April after slumping in the previous two months.

“While it wasn’t a stellar number, it was not weak and it helps assuage fears” that the housing recovery is weakening, said Quincy Krosby, a market strategist with Prudential Financial. “It really did help set the tone of the market.”

On Friday, investors favored stocks that stand to fare better than others in a strengthening economy. Gains were led by technology, materials and consumer discretionary stocks.

The S&P 500 has gained 180 percent since bottoming out in March 2009, during the Great Recession. Stocks are now in the second-longest bull market since 1946, according to data from S&P Capital IQ. The index has also gone 2½ years without a correction. Typically those declines occur once every 18 months.

Another sign that investors have been more nervous this year than last is that while the S&P 500 has ground higher, the riskier parts of the stock market, such as small-company stocks, social media and biotechnology stocks have had sharp sell-offs.

Many investors still remain optimistic though, pointing to record company earnings and the Federal Reserve.

In the first quarter of the year companies in the S&P 500 earned an average of $27.59 a share, the second-highest level recorded, falling just below the $28.46 per share earned in the fourth quarter of 2013. Thus far during the economic recovery, companies have boosted earnings by cutting costs. As the economy continues to strengthen, the hope among investors is that overall demand will improve and corporations will start reporting higher revenues.

Corporations “haven’t had any real help from the economy,” said John Manley, chief equity strategist at Wells Fargo Fund Management. “If the economy ever kicks in, these people who made more with less can make a lot more with more, and that’s going to surprise people.”

The stock market’s rise has also been supported by the Federal Reserve’s policy. Although policy makers are winding down the stimulus, many economists don’t think that the Fed will start raising interest rates before the second half of next year.

U.S. financial markets will be closed Monday for Memorial Day.