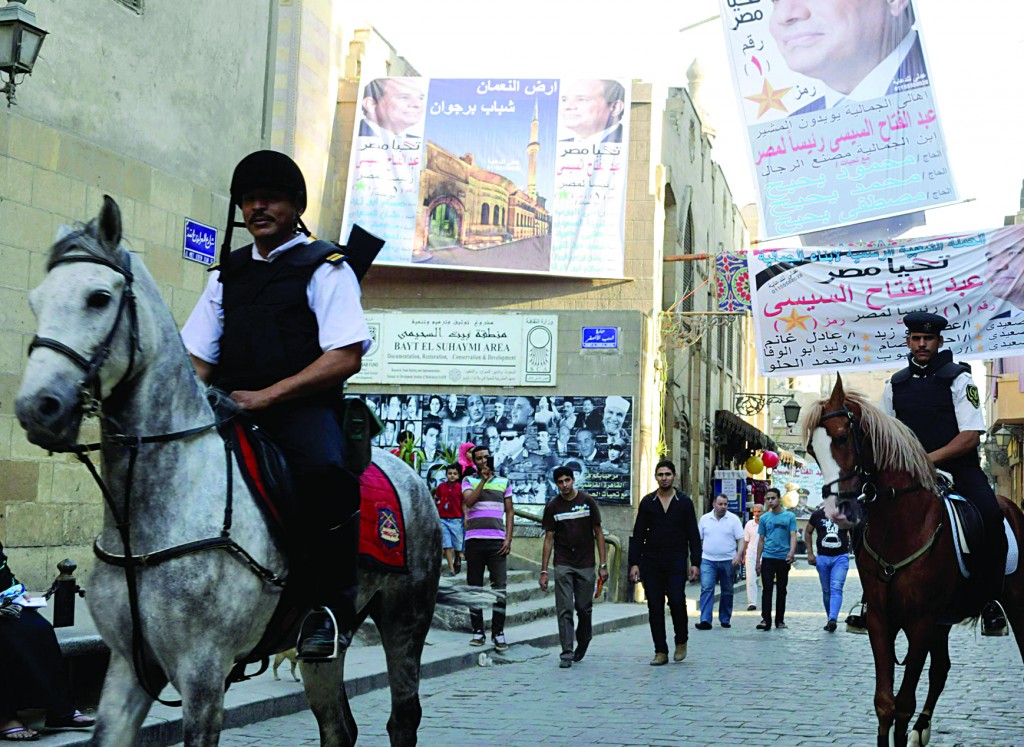 Along a busy Cairo intersection, a poster portrays presidential frontrunner Abdel Fattah al-Sisi as a teacher, engineer, doctor and judge, reassuring supporters who see him as Egypt’s savior.

But in other neighborhoods, opponents splash red paint on the image of the face of the man who toppled Egypt’s first freely-elected president, and who they say has blood on his hands for ordering a violent crackdown.

The former army chief is expected to easily win a May 26-27 presidential election, taking over a polarized country with immense challenges: from an energy crisis to an Islamist insurgency that has sharply worsened since he overthrew the Muslim BrotherhoodMohammed Morsi last year.

Sisi has gained cult-like adulation among backers since removing Morsi. Many Egyptians vocally supported the military-backed government’s decision to order an assault on camps of Morsi supporters last year in which hundreds of people were gunned down on the Cairo streets.

They still back a crackdown that saw thousands of Muslim Brotherhood members rounded up and hundreds sentenced to death. But some cracks have appeared in the field marshal’s support base since the suppression of Islamists has expanded to include secular activists.

Many Egyptians seem willing to overlook allegations of abuse because they see him as a leader who can bring calm after three years of political upheaval.

With Egypt beset by seemingly intractable problems, the square-jawed 59-year-old in aviator sunglasses benefits from an image as a man of action. In interviews, Sisi tells Egyptians the answer to their future is simple: hard work. He faces no serious opposition in the vote.

But to a quiet minority of Egyptians, his rise represents an unsettling reversal of the 2011 uprising that dislodged former air force general Hosni Mubarak after six decades of unbroken rule by military men.

“We will soon see that all this talk is lies,” said a 22-year-old man at a coffee shop near the poster which portrays Sisi as the man who will save Egypt, which was paid for by a former member of Mubarak’s ruling party.

“One of the main reasons we staged the revolution (in 2011) was to get rid of a military man,” said the man, who asked not to be identified for fear of reprisals.