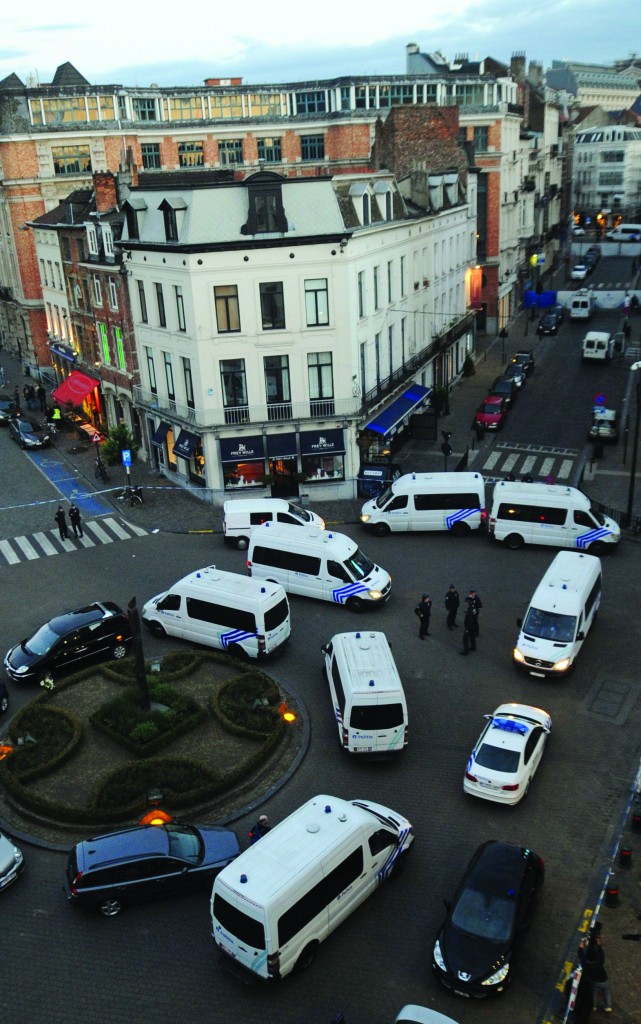 As of Sunday night, police were still on an all-out manhunt for the perpetrator of a shooting at the Jewish Museum in Brussels which left four people dead, including an Israeli couple, a Belgian and a French national, in what appeared to be an anti-Semitic attack.

The victims’ families were notified of their deaths and that Israel was arranging to fly their bodies home.

Hirschson said the attack appears to have been directed at Israelis or Jews, but Israel is awaiting conclusions from the Brussels authorities.

The French and Belgian victims were both employed by the museum.

Belgian Foreign Minister Didier Reynders, who was in the vicinity, said the scene “was terrible and left me shocked” as he saw the bodies of two of the victims lying at the entrance of the museum, located in the fashionable Sablon neighborhood of Belgium’s capital.

Reynders said that “you cannot help to think that when we see a Jewish museum, you think of an anti-Semitic act. But the investigation will have to show the causes.”

“From the images we have seen, we can deduce that the author probably acted alone
and was well prepared,” Ine Van Wymersch, a spokeswoman for the Brussels prosecutor’s office told reporters.

Security around all Jewish institutions in Belgium was raised to the highest level. About half of the country’s 42,000-strong Jewish community lives in Brussels.

At the same time, the French government tightened security around synagogues and Jewish cultural centers on Sunday following an attack on two Jews in suburban Paris hours after the Brussels shootings took place during Shabbos.

French President Francois Hollande said police would catch those responsible for the attack Motzoei Shabbos on two young men wearing traditional Jewish clothing as they were leaving a synagogue in Creteil.

“Last’s night’s murder in Brussels is the result of constant incitement against the state of Israel by various elements in the Middle East and in Europe itself. There are elements in Europe that rush to condemn the construction of a flat in Yerushalayim but do not rush to condemn — or offer only weak condemnations of — the murder of Jews here or in Europe itself and, even worse, welcome unity with a terrorist element such as Hamas, which calls for the destruction of the State of Israel. We oppose such hypocrisy, we protest against it, we will continue to always state the truth, we will continue to fight terrorism and we will continue to build up our state,” Netanyahu said.

Foreign Minister Avigdor Lieberman also put the killings in a broader context of hostility to Jews and Israel:

“The terror attack in the Jewish Museum in Brussels, in which four innocent people were killed, is the result of anti-Israeli and anti-Semitic incitement, expressed, among others, in the call to boycott Israel and Israeli products, as well as in anti-Israeli activity in international forums and the adoption of an automatic, unilateral anti-Israeli position.”

In hopes of attracting assistance from the public in apprehending the murderer, Belgian police published photos of him entering the museum with a rifle and opening fire.

In the images, the shooter can be seen approaching the museum with two large bags, and in another he can be seen firing a Kalashnikov rifle.

One suspect was detained by police for questioning after he drove away from the museum around the time of the attack; a second person was being sought after leaving the area on foot.

Police cordoned off several streets around the museum with blue-and-white police tape, and numerous ambulances and police vans were at the scene.

Viviane Teitelbaum, a member of the Brussels legislature, said anti-Semitic attacks reached a peak in the early 1980s but had dropped off, but she noted a recent rise in anti-Jewish sentiment.

“It has been a very difficult place to live” for Jews, she said, adding that many young people are leaving the country.

The latest attack called to mind the 2012 killing of four Jews in a school in France by an al-Qaida-inspired terrorist, Mohammed Merah.

“This really reminds of what you experienced in France with Merah attacking a Jewish school,” Maurice Sosnowski, president of the Coordinating Committee of Belgian Jewish Organizations, was quoted saying to reporters.

“This is appalling. I would never have imagined something like that happening in Brussels.”

He said no threats have been issued to the Jewish community.

“Two years after Toulouse … this despicable attack is yet another terrible reminder of the kind of threats Europe’s Jews are currently facing.”