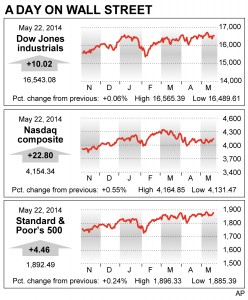 Stocks got off to a good start Thursday and held onto their gains, carving out a modest increase for the second day in a row.

During a relatively slow week, stock investors drew encouragement from some positive news on the economy and housing. Improving earnings from Dollar Tree, Best Buy and other retailers also helped the market.

Major U.S. indexes appeared headed for a slight rise even before trading began. A survey from HSBC suggested a slowdown in China’s economy was flattening, and May’s reading on China’s manufacturing sector was the best in five months.

“A revival in China is good for emerging markets, good for global growth and therefore good for stocks, and not so hot for bonds,” said Krishna Memani, chief investment officer at Oppenheimer Funds.

A U.S. government report showing a rise in the number of people seeking unemployment benefits last week didn’t dampen the market’s rise. Nor did the latest sales data for previously occupied U.S. homes, which rose modestly on a monthly basis in April, but was down from a year earlier, according to the National Association of Realtors.

The Dow and Nasdaq remain down slightly for 2014.

Major indexes have finished slightly higher in four of the last five trading days. The gains have nudged the S&P 500 index, which hit a high early last week, up 0.8 percent for this week.

Bond prices fell slightly Thursday. The yield on the 10-year Treasury note edged up to 2.55 percent from 2.54 percent late Wednesday.

Among the biggest variables influencing the markets this year have been uncertainty over when U.S. growth will accelerate and concern that China’s growth is slowing.

The latest batch of economic and earnings data suggest the global economy is recovering, albeit slowly.

A pickup in spending by shoppers at Dollar Tree helped boost the discount store operator’s income in its latest quarter. Its stock gained $3.31, or 6.6 percent, to $53.31, the biggest gain in the S&P 500 index.

Sears Holdings reported a wider quarterly loss as sales slumped. Its shares were down for much of the day, but recovered by late afternoon. Sears rose $1.54, or 4.2 percent, to $38.10.

Among other stocks in the news:

• Lorillard fell the most in the S&P 500 index following reports that the tobacco seller could tie up with Reynolds American, creating the country’s second-largest producer. The stock sank $3.12, or 5 percent, to $59.51.

This article appeared in print on page 8 of the May 23rd, 2014 edition of Hamodia.