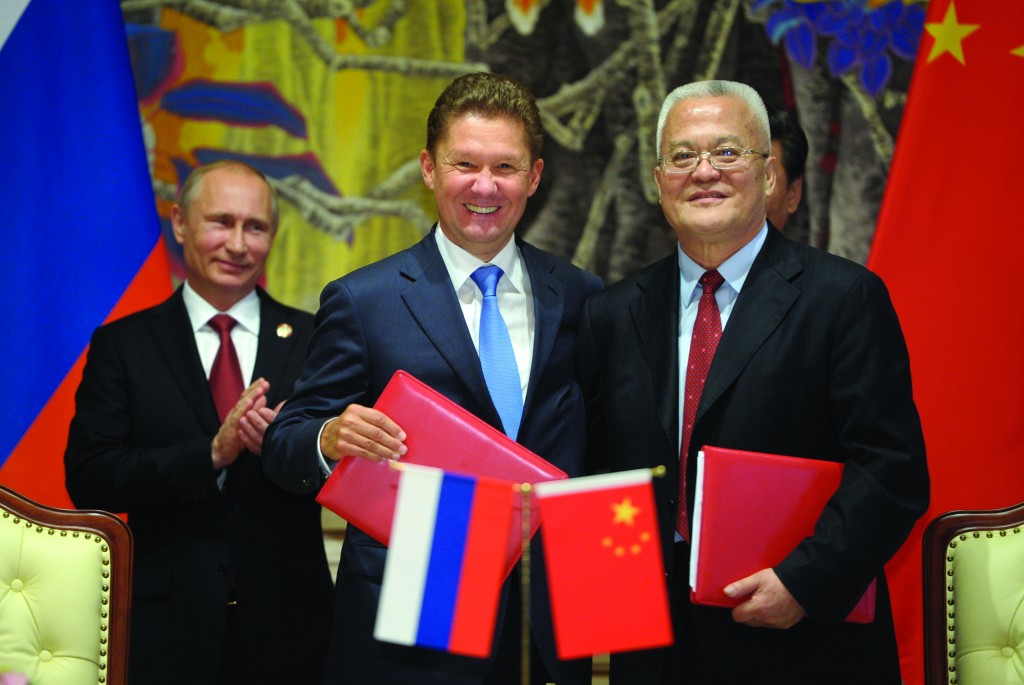 Russia and China signed a landmark $400-billion natural gas deal Wednesday, sealing their friendship at a time when both are unpopular in their neighborhoods and at odds with the United States.

Russian President Vladimir Putin desperately needed to seal the long-negotiated deal to make up for the loss of European customers, which have spurned Russia over its annexation of Crimea from Ukraine.

Putin witnessed the signing Wednesday in Shanghai along with Chinese President Xi Jinping. The two leaders were on the last day of a security summit. The actual signing was done by the heads of the two countries’ state-owned energy giants, Russia’s Gazprom and the China National Petroleum Corp.

Ahead of the meeting, Putin had extolled Beijing as a most “reliable friend.”

“It would not be wrong to say that it [the relationship with China] has reached the highest level in all its centuries-long history,” Putin said in an interview with Chinese media.

The gas deal has been in the works since the 1990s, with China holding out until the bitter end for price concessions. Financial terms of the pact were not disclosed.

The 30-year deal calls for 38 billion cubic meters of gas to be supplied from Siberia through a pipeline to energy-hungry cities like Beijing and Tianjin in the northeast of China.

Russia and China also celebrated their friendship with joint maritime exercises in the East China Sea, where China is locked in disputes with Japan over uninhabited islands.

“The relationship between China and Russia is definitely at a new stage. Both trust each other. The leaders keep frequent communication,” said Yang Chuang, a retired diplomat from the China Foreign Affairs University in Beijing.

The friendliness between the onetime foes comes as both are caught in a cycle of deteriorating relations with the United States. The U.S. and China are dueling over accusations that China’s military is engaged in internet hacking of U.S. businesses; Russia has angered the United States by embracing Edward Snowden and intervening in Ukraine.

Putin’s visit to Shanghai comes almost exactly 25 years after the historic 1989 trip to Beijing by then-Soviet leader Mikhail Gorbachev to seal the reconciliation of the two communist powers. Gorbachev was welcomed as a beacon of liberalization by pro-democracy students who were camped out at Tiananmen Square, just weeks before the brutal crackdown by the Chinese military.

A quarter-century later, Beijing is under heightened security as the leadership rounds up activists and curtails the internet to prevent commemorations of those killed in the crackdown. China is locked in a standoff with Vietnam and the Philippines over resource rights in the South China Sea — a situation it blames on the United States.

Putin, meanwhile, faces international reprobation, the latest being comments that Britain’s Prince Charles made in private during a visit to Canada, where he reportedly compared Putin’s seizure of Crimea to Adolf Hitler’s annexation of Poland.

“I wouldn’t say that there is a new Cold War developing. Nobody wants that. It is just that China and Russia are paying attention to their own economic interest,” said retired diplomat Yang.