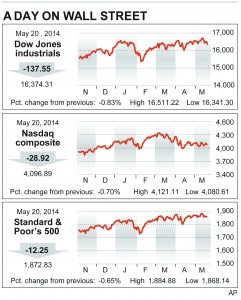 Retailers are used to throwing big sales. On Tuesday, it was investors who unloaded shares in several big retail chains, dragging down U.S. stocks and wiping out small gains from a day earlier.

The downturn in retail stocks came in a slow week for economic news and ahead of the Memorial Day weekend, which contributed to lighter-than-usual trading volumes. The weakness stirred fresh concerns about the retail sector and the outlook for consumer spending in the U.S.

“The fact that we’re seeing such widespread weak growth among retailers means many (investors) are extrapolating that to the rest of the year,” said Kate Warne, an investment strategist at Edward Jones.

Dick’s Sporting Goods plunged 18 percent after its earnings and revenue fell short of what investors were expecting. The stock fell $9.56 to $43.60. Staples dropped 13 percent after the office supply chain said its earnings fell sharply in the latest quarter. Staples slid $1.68 to $11.71.

Home Depot bucked the trend, even though its latest quarterly results fell short of Wall Street’s expectations. The home improvement retailer said a key sales metric improved despite a slow start to the spring home-selling season. The company also raised its full-year earnings forecast. Its stock climbed $1.46, or 2 percent, to $77.96.

U.S. index futures fell early Tuesday, before the opening of regular stock trading, as investors reacted to the dismal earnings results. The market opened lower and remained in the red the rest of the day. The selling accelerated around midday.

“It seems like this is more about taking some profits on stocks that have enjoyed some nice profits and kind of reassessing as to what they want to do with their investments,” said JJ Kinahan, chief strategist at TD Ameritrade.

The Dow and Nasdaq remain down for 2014.

Small-company stocks fell more than the rest of the market as investors ditched higher-risk investments. The Russell 2000 index sank 16.53 points, or 1.5 percent, to 1,097.90, near a six-month low.

Bond prices rose, driving the yield on the 10-year U.S. Treasury note down to 2.51 percent from 2.54 percent late Monday. Investors tend to buy bonds when they see a time of weakness in stocks overall.

Nine of the 10 sectors in the S&P 500 index fell, led by telecommunications stocks. The only one that rose was utilities. Investors tend to favor that sector when they want to play it safe with low-risk stocks that pay steady dividends.

A week after the S&P touched an all-time high, the market has mostly alternated between small gains and losses. The three major indexes finished higher for the second trading day in a row Monday. A light schedule of economic reports for much of this week heading into Memorial Day weekend is likely to thin trading as the weekend nears.

Among other the stocks making news Tuesday:

— General Motors recalled 2.4 million vehicles in the U.S. as part of a broader effort to resolve outstanding safety issues more quickly. Shares in GM lost $1.07, or 3.1 percent, to $33.18.