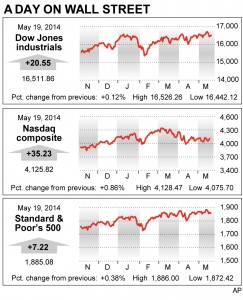 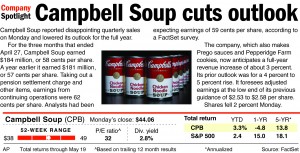 Stocks finished slightly higher on Monday, adding to the small gains the market carved out at the end of last week.

A dearth of fresh economic data had many investors focusing on headline-grabbing corporate deals, including a $48.5 billion bid by AT&T to acquire DirecTV and a joint venture between Johnson Controls and a Chinese company that will form the world’s largest maker of automotive interiors.

The latest batch of deals is a good sign for the market and further illustrates that many companies have the financial ammunition and appetite to grow through acquisitions.

Even so, much of the market remained in drift mode Monday, but still near the latest all-time high set by the Standard & Poor’s 500 index a week ago.

The three major indexes were down in premarket trading as investors reacted to the AT&T deal, which was announced late Sunday. The deal could face close scrutiny from the Federal Communications Commission and Department of Justice.

When regular trading began, the S&P 500 and Nasdaq composite drifted into positive territory, while the Dow Jones industrial average lagged.

Pfizer has been courting AstraZeneca since January. It announced Sunday that it was ready to raise its stock-and-cash offer by 15 percent to $118.8 billion.

By midmorning, major U.S. indexes had each captured small gains that would hold the rest of the day.

The S&P, which hit an all-time high two days in a row early last week, is up 2 percent for the year. The Dow and Nasdaq remain down for 2014.

Investors are in a wait-and-see mode, having digested a mostly positive but unspectacular batch of first-quarter corporate earnings in recent weeks, in addition to mixed economic news.

A light schedule of economic reports for much of this week means investors may not get much fresh insight about the economy until later this week, when they’ll see new figures on sales of previously occupied homes and newly built homes. On Wednesday, the Federal Reserve releases the minutes of last month’s meeting of the central bank’s policy committee.

“To this point, we’ve seen a rotation within and not out of equities, and we expect that trend to continue into the mid-year,” said Terry Sandven, chief equity strategist for U.S. Bank.

Meanwhile, Johnson Controls jumped $1.91, or 4.3 percent, to $46.69 on news of its planned venture with China-based Yanfeng Automotive Trim Systems.

Seven of the 10 industry sectors in the S&P 500 ended trading higher, led by technology stocks. Utilities were the biggest laggard.

Campbell Soup also ended lower after the food company reported earnings that fell short of Wall Street estimates. The company also lowered its full-year revenue outlook, noting that it was disappointed that soup sales failed to meet expectations. Its shares fell $1.06, or 2.3 percent, to $44.06.

This article appeared in print on page 8 of the May 20th, 2014 edition of Hamodia.