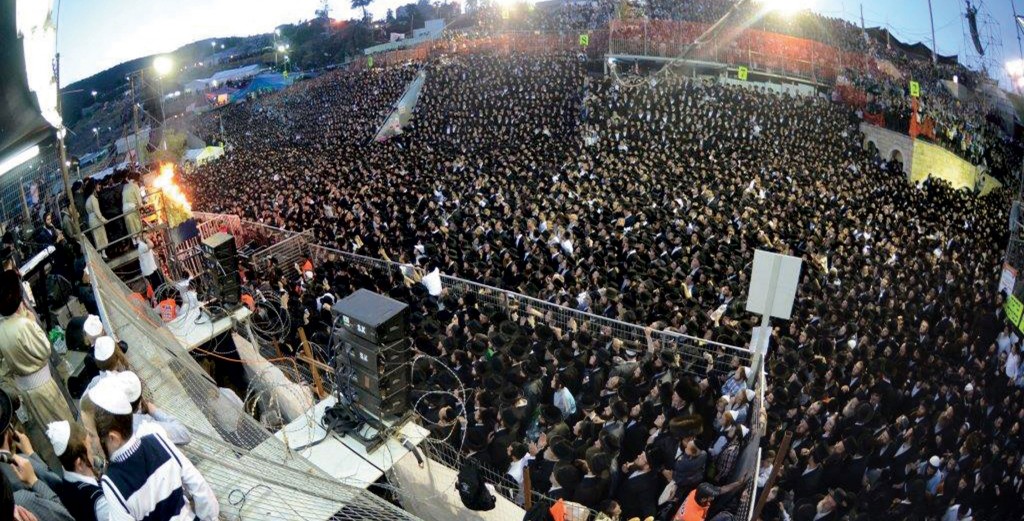 The smooth running of buses and shuttles to and from Meron on Lag BaOmer belied the predictions in some quarters of a rerun of last year’s Lag BaOmer traffic debacle — until Sunday night, that is, as when it all seemed to fall apart.

The hilula began shortly after Shabbos, as those staying in Meron and its environs streamed to the kever. The Boyaner Rebbe, shlita, who was in Meron with hundreds of his Chassidim for Shabbos, lit the main bonfire on the roof of the tziyun around midnight. The zechus to light the fire was purchased by his ancestor, Harav Yisrael, the Rebbe of Ruzhin, zy”a, and has been passed down the generations to the present Boyaner Rebbe.

It was nearly a model of smooth functioning, as hundreds of thousands streamed to Meron to daven and rejoice with their fellow Jews at the kever of Rabi Shimon bar Yochai.

All through Motzoei Shabbos and Sunday, the flow of hundreds of buses was steady, shuttles from the parking areas ran without any major foul-up, and many visitors even had words of praise for the work of the police, with whom negotiations in the runup to the event had been problematic, as Hamodia reported last week.

But by 9 p.m. on Sunday, as the event drew to its conclusion, and tens of thousands made their way down from the kever to return home — all at the same time — chaos finally caught up with euphoria.

The crowds flowed onto the road, blocking buses and bringing all traffic to a halt. The situation was exacerbated by the conduct of the police, who turned violently aggressive, using their horses indiscriminately against men, women and children and, rather than restoring order, added to the disorder.

The disappointment of the organizers was almost beyond description; after working so hard to make the event a success, seeing the fruit of their efforts, only to witness the worst scenario come true at the very end, on the way home.

Private cars and buses were banned by police from the area around Meron from Friday onward to prevent congestion. In spite of promises from police officials to allow buses from private companies to reach Meron, that did not happen. All roads leading to Meron were clear, nevertheless, the private buses — carrying tens of thousands of mispallelim — were forced to park at distant parking spots, forcing men, women and children to transfer to different buses for the last few miles.

In the end, the position of chareidi leaders was borne out, that they could have been allowed full access without serious consequences. Nevertheless, in general the operation was widely regarded as successful, at least through Sunday afternoon.

In anticipation of the increased demand for public transportation that would reach Meron directly without need for a shuttle from far-off junctions, Egged boosted its fleet. For example, they added approximately 35 percent more buses from Bnei Brak to Meron over last year. Similarly, more buses than last year departed from Ashdod and Haifa. Transportation from Beit Shemesh was better organized than last year, relieving pressure from Yerushalayim, which saw a drop in travelers to Meron on Motzoei Shabbos.

Even so, there were complaints of delays at various locations along the way, such as Tzfas and Carmiel. And attendees said that the police could have been more flexible in routing traffic. For example, a certain parking area reserved for the handicapped was left unused, and it would have been possible to allow private vehicles there.

Many people will not consider making the trip by public transportation, and if they are not permitted to arrive to Meron, they will stay home. In the future, it was suggested, allowances should be made for them.

Overall, due to the late departure of Shabbos and fears of massive traffic tie-ups, some people did stay home. But the total number of participants from all over the country and abroad still reached into the hundreds of thousands. No specific figures were immediately available.

In fact, estimates varied widely and some said, on the contrary, there were more people this year than last year.

That was the opinion of Harav Chaim Yaakov Safrin, Rosh Kollel Kamarna-Bnei Brak, who spoke with Hamodia on his way back from Meron on Sunday evening. He described the scene at the kever as still very crowded well into the afternoon of Lag BaOmer.

More than the numbers, however, he stressed the atmosphere. “It was very uplifting, one could sense the tremendous simchah in the air,” he said.

Harav Safrin has been making the pilgrimage to Meron every year since he was seven years old.

He recalls that one time, about 20 years ago, he was in Yerushalayim but without the means of getting to Meron. But he remembered what his Rebbe had once said, that it’s like a chasunah, if you don’t come, then you can’t be considered one of the kerovim — a member of the family. He wanted to feel close to Rabi Shimon, but had no way of getting there.

It was already afternoon, when a friend asked if he’d been to Meron already. When he confessed that he hadn’t, and explained why, his friend pulled out a 50-shekel note and gave it to him to pay for the trip.

“In those days, you know, 50shekels was worth a lot more than it is now.”

Harav Shmuel Geller, originally of Norwich, Connecticut, now a resident of Zichron Yaakov, has been going to Meron on Lag BaOmer for some 30 years.

In order to avoid the crowds as much as possible, he told Hamodia, he would leave late at night with a group of avreichim in a minivan, arriving around 2a.m., make their way to the kever and stay until around 3:30, then return to Zichron. After a bit of sleep, they would daven Shacharis and arrive in time for kollel seder at 9:00.

“Of course, it wasn’t anything like it is today. There were big crowds then too, but nothing like the masses we have now; and the place has been built up a great deal.”

In contrast to the large tents that are set up today to provide endless quantities of food and drink, Harav Geller recalls that it was all on a much smaller scale then, and the style somewhat improvisatory.

“They would toss sandwiches down to us in the courtyard from a second story. ‘Who wants tuna fish?’ ‘Egg Salad?’ and down it would come, like manna from Shamayim,” he says, smiling.

What he remembers most, though is “the feeling of love and of the unity of the Jewish people, all of us coming to Rabi Shimon to daven our hearts out for ourselves, our families, for Klal Yisrael.”

Klal Yisrael, in all its variegations, is found at Meron on Lag BaOmer; Chassidim, Litvaks, Ashkenazim, Sephardim, and every level of observance and non-observance.

Regarding the last group, Harav Geller quoted his mashgiach at Yeshiva Torah Vodaath, Harav Moshe Wolfson, shlita, who said that Rabi Shimon represents the pnimiyus, the hidden essence, of Torah, and as such can reach the hearts of all kinds of Jews, including those who are, unfortunately, far from Torah observance.

Even the secular Israeli media, not favorably disposed to religious events of this sort, apparently could not entirely resist the good feelings generated by the great event.

As one young visitor told The Jerusalem Post, after spending Shabbos in Tzfas, his group boarded a bus to Meron at about 11 p.m. “The atmosphere on the bus was joyful; people excited to be in Meron and visit the grave of one of the most influential scholars in Jewish history. We are singing, ecstatic to be a part of something that has been a tradition for generations.

“When we get to Meron, there is a buzzing form of energy present as we walk towards the foot of the mountain; Jews from all backgrounds but mainly religious Jews are singing, dancing and walking around. We decide to make it to the grave; a near impossible task because hundreds of thousands of other people are thinking the exact same thing.

“We make our way and join the massive group of people wishing to enter. Slowly but surely, we proceed forward … At one point we lift our feet off the ground and realize we are still being carried forward by the crowd. At the entrance to the women’s section, we get pushed forward and almost thrown inside by the huge crowd. Inside, women are crying, praying and focusing solely on Rabi Shimon Bar Yochai. We spend some time inside, taking it all in; it was overwhelming to say the least, but also awe-inspiring.

“Finally we made it through and met up with the others before we left. We all agreed that it was an amazing feeling, to be a part of something so significant to Jewish people all over the world. We feel happy. We feel alive.”