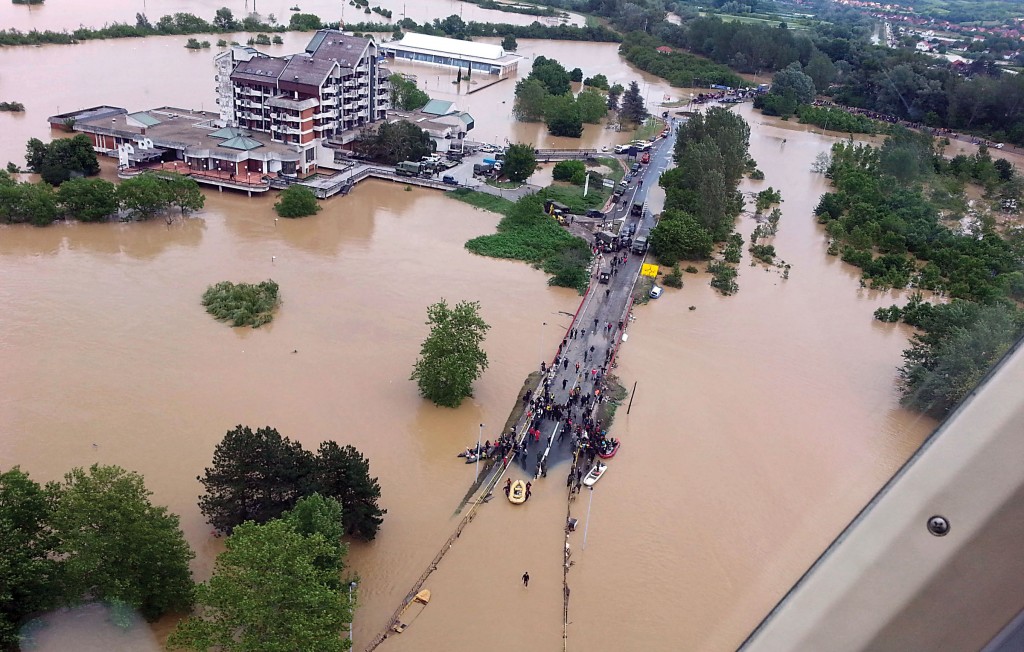 Floodwaters triggered more than 3,000 landslides across the Balkans on Sunday, laying waste to entire towns and villages and disturbing land mines leftover from the region’s 1990s war, along with warning signs that marked the unexploded weapons.

The Balkans’ worst flooding since record keeping began forced tens of thousands of people from their homes and threatened to inundate Serbia’s main power plant, which supplies electricity to a third of the country and most of the capital, Belgrade.

Authorities organized a frenzied helicopter airlift to get terrified families to safety before the water swallowed up their homes. Many were plucked from rooftops.

Floodwaters receded Sunday in some locations, laying bare the full scale of the damage. Elsewhere, emergency management officials warned that the water would keep rising into Sunday night.

Three months’ worth of rain fell on the region in three days, producing the worst floods since rainfall measurements began 120 years ago. At least two dozen people have died, with more casualties expected.

The rain caused an estimated 2,100 landslides that covered roads, homes and whole villages throughout hilly Bosnia. Another 1,000 landslides were reported in neighboring Serbia.

The cities of Orasje and Brcko in northeast Bosnia, where the Sava River forms the natural border with Croatia, were in danger of being overwhelmed. Officials in Brcko ordered six villages to be evacuated.

Rescuers urged people to go to the balconies or rooftops of their houses with bright fabric to make themselves visible.

Brcko Mayor Anto Domic said that unless the Bosnian Army is able to reinforce from the air, the city will be flooded completely. He called for the Defense Ministry to use helicopters to lower steel barriers that could be backed by sandbags to contain the water.

“It is a very demanding task,” he said, acknowledging that officials would have no other way to protect the port city of more than 70,000.

Civil protection commander Fahrudin Solak said the Sava River was spilling over another portion of the flood barrier in Orasje while emergency workers tried desperately to reinforce it with sandbags.

In Serbia, where floods have inundated towns and villages, authorities braced for high water that could last for several more days.

The floods and landslides raised fears about the estimated 1million land mines planted during Bosnia’s 1992-95 war. Nearly 120,000 of the unexploded devices remain in more than 9,400 carefully marked minefields. But the weather toppled warning signs and, in many cases, dislodged the mines themselves.

Beyond the immediate danger to Bosnians, any loose mines could also create an international problem if floodwaters carry the explosives downstream. Experts warned that mines could travel through half of southeast Europe or get stuck in the turbines of a hydroelectric dam.