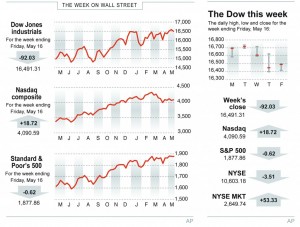 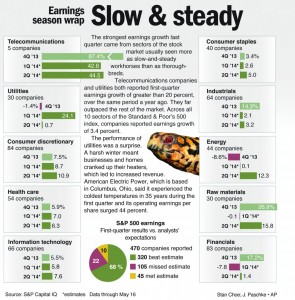 Better results from retailers and demand for telecommunications shares helped push the stock market to a small gain on Friday.

Telecoms rose the most among the 10 industries in the Standard & Poor’s 500 index. Their jump followed news that Warren Buffett’s Berkshire Hathaway made a new investment in Verizon Communications. Other big-name investors, including John Paulson, also reportedly took stakes. Verizon climbed $1.11, or 2 percent, to $49.07.

Major indexes spent much of the day meandering around the breakeven mark. Stocks started higher at the open but reversed course after a report on consumer confidence showed a drop last month. The market took a turn up in the last hour of trading, turning minor losses into minor gains.

“We’ve had a lot of starts and stops recently,” said Dan Cook, a director at Nadex, an exchange in Chicago. “We’re at high levels, so it’s a time to be cautious.”

Investors said the choppy trading reflects a larger uncertainty. The stock market is trading near record highs, but investors see little reason for excitement. Earlier in the week, the S&P 500 index notched all-time highs two days in a row. On Thursday, mixed economic news and a weak earnings report from Wal-Mart Stores drove the market to its worst day in more than a month.

Jim Paulsen, chief investment strategist at Wells Capital Management in Minneapolis, said traders who hunt for patterns in the market’s moves have spotted some warning signs worth noting. For instance, the yield on the 10-year Treasury note recently dropped to its lowest point this year. That’s usually a sign of an economic slowdown.

“But most of the economic reports are coming in better than people thought,” Paulsen said. “If you only paid attention to the bond market over the past few years, you’d think the world was going to end. Not the stock market. Which one was right?”

Before the market opened Friday, the government reported that builders started work on more houses in April, as U.S. construction surged to its highest pace in six months. Nearly all of that increase, however, came from new apartment buildings, a sign that Americans are still struggling to buy single-family homes.

This article appeared in print on page 8 of the May 19th, 2014 edition of Hamodia.