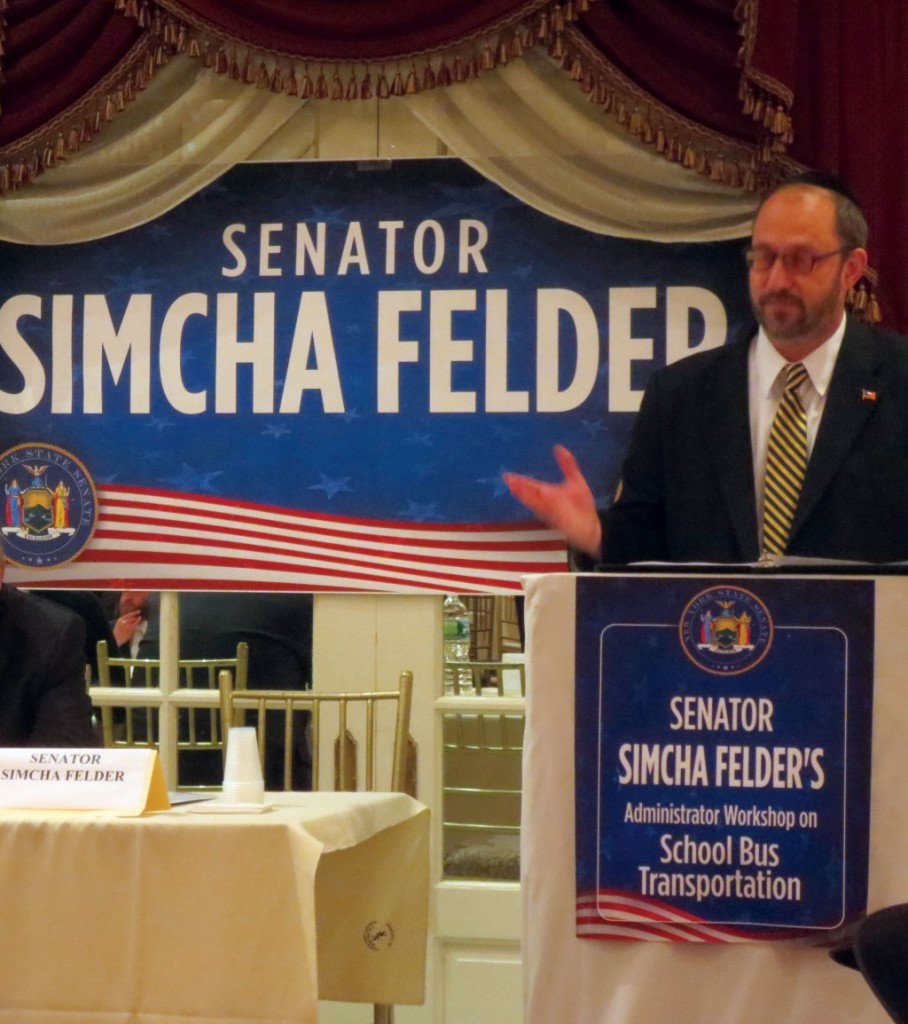 Declaring that tuition-paying yeshivah parents are not “moochers,” state Sen. Simcha Felder on Thursday touted the direct effects the yeshivah busing law he sponsored had on parents’ pocketbooks, at the same time lamenting the loss of aid the education tax credit bill he sponsored this year would have had.

The transportation law, which passed last year and allowed yeshivos to directly hire buses to take home students who get out after the normal 4:30 limit, was made permanent in this year’s state budget, which was signed in April.

The busing law, which was sponsored in the Assembly by Helene Weinsten (D-Brooklyn), who attended Thursday’s meeting in Ateres Chaya, also guarantees a bus stop within 600 feet of the child’s home, as opposed to 1,200 feet required of regular busing.

“I say to people in Albany,” Assemblyman Dov Hikind said, “maybe one day all public schools will have longer days. The more education, the better.”

Under the new law, yeshivos must hire their own bus companies, pay them, and then file for reimbursement each month. Many yeshivos joined the new program last year, while others held back, preferring to rely on regular public transit until the inaugural year shows it worked.

It did, Felder said. The $2 million allocated for the 9,000 yeshivah students was enough to cover the bill, and more money was added for next year to cover the newly joining yeshivos.

Both Felder and Hikind praised the intensive, behind-the-scenes work done by Rabbi Shiya Ostreicher, who was instrumental in shepherding the busing law through the labyrinth of Albany.

“Whoever knows him,” Hikind said, “knows that I am not exaggerating by calling Shiya an unsung hero.”

Felder used the opportunity to explain what the Education Investment Tax Credit bill he introduced this year would have done for their bottom line.

He noted that the final budget allocated a total of $2.8 million for yeshivos, compared to $75 million the bill would have earned parents. And the state gives $21 billion to overall education, including $1.5 billion in money added this year.

“It may be the Smart Schools Act,” Felder said , referring to a $2 billion fund to add internet access to classrooms, “but it’s not so smart for yeshivos.”

In concluding its first year, Felder said that the busing bill worked out for everyone.

“I remember the same meeting last year,” Felder said to the administrators gathered. “And, baruch Hashem, the looks on your faces are a lot different now.”