After Decades of Exodus, Companies Are Returning Production to the U.S.

In 2001, Generac Power Systems joined the wave of American companies shifting production to China. The move wiped out 400 jobs in southeast Wisconsin, but few could argue with management’s logic: Chinese companies were offering to make a key component for $100 per unit less than the cost of producing it in the United States.

Now, however, Generac has brought manufacturing of that component back to its Whitewater plant – creating about 80 jobs in this town of about 14,500 people.

The move is part of a sea change in American manufacturing: After three decades of an exodus of production to China and other low-wage countries, companies have sharply curtailed moves abroad. Some, like Generac, have begun to return manufacturing to U.S. shores.

Although no one keeps precise statistics, the retreat from offshoring is clear from various sources, including federal data on assistance to workers hurt by overseas moves.

U.S. factory payrolls have grown for four straight years, with gains totaling about 650,000 jobs. That’s a small fraction of the 6 million lost in the previous decade, but it still marks the biggest and longest stretch of manufacturing increases in a quarter century.

Harry Moser, an MIT-trained engineer who tracks the inflow of jobs, estimates that last year marked the first time since the offshoring trend began that factory jobs returning to the U.S. matched the number lost, at about 40,000 each.

“Offshoring and ‘re-shoring’ were roughly in balance – I call that victory,” said Moser, who traces his interest in manufacturing to his parents’ work at the long-closed Singer Sewing Machine plant in New Jersey. (He once worked there, too.)

He now runs the Reshoring Initiative, a Chicago nonprofit that works with companies to bring manufacturing jobs back to the United States.

Several factors lie behind the change.

Over the last decade, Chinese labor and transportation costs have jumped while U.S. wages have stagnated. The average hourly pay for non-supervisory manufacturing workers in the United States has barely kept up with inflation, rising, on average, just 2.3 percent over the last 10 years and by only half that since 2010, according to Labor Department figures.

Factoring in the rise in value of its currency, China’s base wage, measured in dollars, has risen 17 percent a year, according to an April report by Boston Consulting Group.

And the rise of online commerce has made local control of supply chains more important, especially because many U.S. manufacturers report growing problems with quality control of goods made in China.

“We got to the point where everything we were bringing in had to be inspected,” says Lonnie Kane, president of Los Angeles apparel maker Karen Kane, noting that his company used to check just 10 percent of goods from China.

“Now, prices are escalating, quality is dropping and deliveries are being delayed,” he says. In the last three years, Kane has shifted 80 percent of his production from China back home.

Expansion in the domestic apparel industry remains unusual, because the labor-intensive work can be done in many low-wage countries. But in other industries, a growing number of domestic and foreign companies – including General Electric, Caterpillar, Toyota and Siemens – are opting to build or expand their facilities in the U.S., particularly in the Southeast, where labor costs are relatively low.

For the first time, some small contract manufacturers in the U.S. are beating bigger rivals in Asia, the center of global industrial production.

At Zentech Manufacturing in Baltimore, the company’s president, Matt Turpin, recalls his skepticism when salesmen told him two years ago about their efforts to land a contract making 5,000 to 10,000 wireless printers. He was sure an overseas competitor would get the work.

“I don’t know why you’re wasting your time chasing that business,” he says he told the sales force.

Zentech ultimately won the contract, and Turpin says the company added at least five full-time employees to his shop, where the front office window is draped with a large American flag.

William Davidson, a test technician at Zentech, now earns $17.50 an hour working on those printers and other company products. Before getting hired at Zentech three years ago, Davidson, 62, had been unemployed for 18 months. His previous employer, a Delaware repairer of cable boxes, had moved its operations to Mexico.

“The worst part of it was we had to help them pack things up for the move,” he says.

Here in Wisconsin, a similar story has played out with Generac.

Aaron Jagdfeld, the company’s chief executive, was the comptroller at the time of the offshoring. Jagdfeld, now 42, had grown up in the region and graduated from the University of Wisconsin at Whitewater with an accounting degree.

The offshoring “didn’t feel right” because of the families affected by layoffs, he said, but the company needed to make the move to remain competitive.

Generac grew rapidly over most of the rest of the decade. Its sales rose to $1.5 billion last year, and it now has about 3,300 workers, including 720 in Whitewater, its largest plant. But the last decade also saw costs surge in China while they increased little in the United States.

What began as a $100 gap in the cost of producing an alternator narrowed as the Chinese yuan jumped in value and Chinese wages and other costs soared.

The tipping point came when Generac had enough sales to justify investing millions of dollars in new equipment for the Whitewater plant. The company can now produce an alternator with one worker in the time it took four workers in China.

Although a small price gap remains, Jagdfeld figured that having greater control over delivery would make up the difference.

More frequent power outages – from Hurricane Katrina and Superstorm Sandy, not to mention this past winter’s ice storm in the South – have brought bursts of orders for portable generators, challenging the company’s inventory and delivery capabilities.

“We were constantly fighting a battl 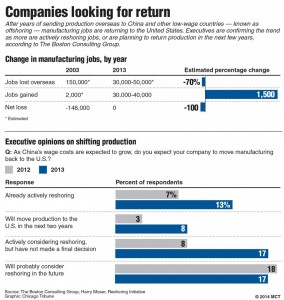 e for what product was needed, and we were always guessing wrong,” Jagdfeld said. “We kept saying, ‘If we could just control the alternator, we’d have a better opportunity to respond more effectively.’ ”

Those sorts of calculations lead experts who have studied re-shoring to see potential for manufacturers – particularly of appliances, transportation equipment, electronics and machinery – to return jobs to the United States.

Led by these industries, 21 percent of large manufacturers in the United States said they were already returning production or would do so over the next two years, according to a survey Boston Consulting conducted last summer.

“In 2012, companies told me, ‘You’re crazy,’ ” said Hal Sirkin, a senior partner at the consulting group’s office in Chicago. “Now they’re doing it – maybe not all the way, but they’re testing the waters.”

This article appeared in print in the May 15th, 2014 edition of Hamodia.