274 Dead in Turkey’s Mine Disaster 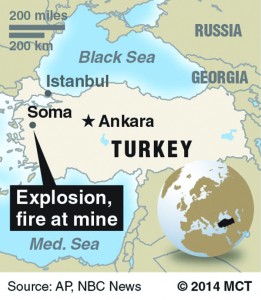 In a relentless procession that ignited wails of grief and flashes of anger, rescue workers coated in grime lumbered out of a mine in western Turkey again and again Wednesday, struggling to carry bodies covered in blankets.

The corpses’ faces were as black as the coal they worked on daily. There were 274 of them — and the fate of up to 150 other miners remained unclear in Turkey’s deadliest-ever mining disaster.

While emergency workers battled a toxic mix of carbon dioxide and carbon monoxide in deep tunnels, anger and despair engulfed the town of Soma, where Turkish officials said at least 274 miners died in Tuesday’s coal mine explosion and fire.

Prime Minister Recep Tayyip Erdogan was heckled as he tried to show concern and anti-government protests erupted in Soma,  Istanbul and Ankara, the capital. Erdogan had to seek refuge in a supermarket, surrounded by police, then leave in a black car after the protest in Soma died down. He also did little for his reputation by noting that workplace accidents are “ordinary things” that happen in many countries.

The display of anger could have significant repercussions for Erdogan, who is widely expected to run for president in the August election, although he has not yet announced his candidacy.

Tensions were high as hundreds of relatives and miners jostled outside the mine’s entrance Wednesday, waiting for news amid a heavy police presence. Women wailed uncontrollably and men knelt sobbing or simply stared in disbelief as rescue workers removed body after body.

Energy Minister Taner Yildiz said 787 people had been inside the coal mine at the time of Tuesday’s explosion: 274 had died, 363 had been rescued and scores of them were injured.

Erdogan said Wednesday morning that 120 miners were still missing. There was no way to reconcile the differing figures.

Rescuers were still trying to vent out the carbon dioxide and carbon monoxide and pump clean air into the mine, according to mine owner Soma Komur Isletmeleri A.S.

Some workers had been up to 420 meters (460 yards) deep inside the mine, Yildriz said. One rescue worker said he had led a 10-man team about a kilometer (half-mile) down into the mine’s tunnels. They recovered three bodies but had to turn around and flee due  to smoke.

The last worker rescued alive emerged from the mine around dawn and the first burials took place later Wednesday. Rescue operations were halted for several hours into Thursday morning because high gas concentrations in the mine needed to be cleared.

Erdogan had declared three days of national mourning and postponed a trip to Albania to visit the mine in Soma, about 250 kilometers (155 miles) south of Istanbul. He had warned that some radical groups would try to use the disaster to discredit his government.

Yet his efforts to appear statesman-like — discussing rescue operations with authorities, walking near the mine entrance, trying to comfort two women — did not go over well. Some of his statements appeared completely tone-deaf.

“These are ordinary things. There is a thing in literature called ‘work accident’… It happens in other work places, too,” Erdogan told reporters as he tried to deflect a question about who was responsible for the disaster. “It happened here. It’s in its nature. It’s not possible for there to be no accidents in mines. Of course we were deeply pained by the extent here.”

Mining accidents are common in Turkey, which is plagued by poor safety conditions. Tuesday’s explosion tore through the mine during a shift change, which likely raised the casualty toll.

Turkey’s Labor and Social Security Ministry said the mine had been inspected five times since 2012, including two months ago in March, and that no issues violating work safety and security were detected. But the country’s main opposition party said Erdogan’s ruling party had recently voted down a proposal to hold a parliamentary inquiry into a series of small-scale accidents at the mines around Soma.

This article appeared in print on page 1 of the May 15th, 2014 edition of Hamodia.