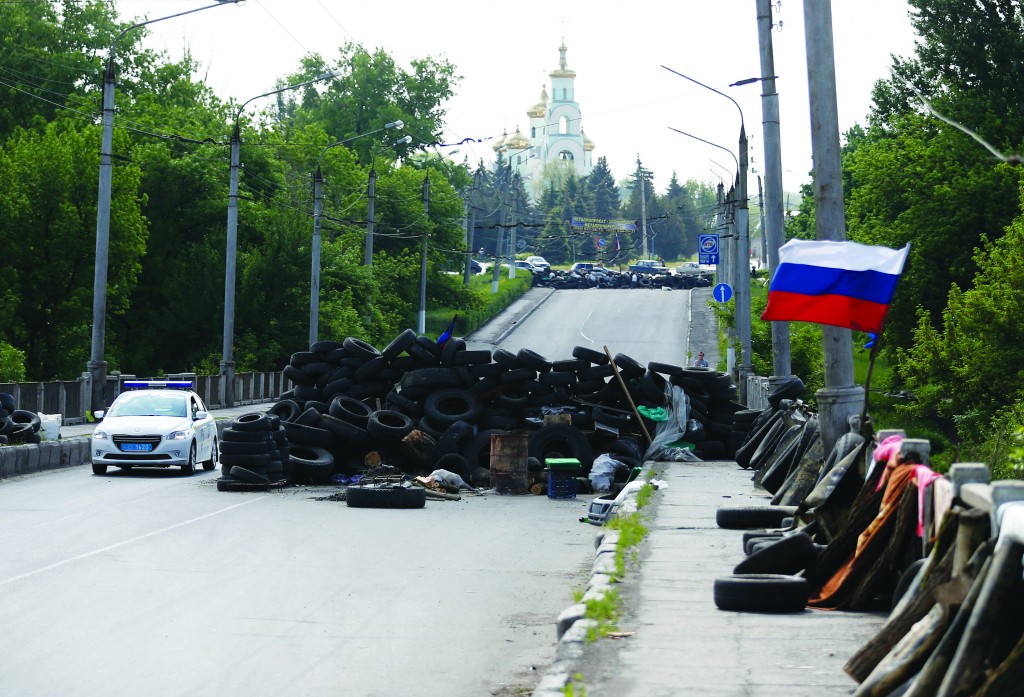 An insurgent ambush killed six soldiers Tuesday in eastern Ukraine as Germany moved to jumpstart a possible plan toward peace that includes launching a dialogue on decentralizing the government in Kiev.

Ukraine’s leadership appeared cool to the plan and U.S. officials view its prospects for success skeptically. But some analysts say Russian President Vladimir Putin is more likely to accept a deal that doesn’t come from Washington

German Foreign Minister Frank-Walter Steinmeier is in
Ukraine to try to broker a quick launch of talks between the central government and pro-Russia separatists. That would be a first step in implementing a “road map” drawn up by the Organization of Security and Cooperation in Europe (OSCE)  aimed at settling the crisis.

The OSCE is a trans-Atlantic security and rights group that includes Russia and the U.S., whose sparring over each other’s role in Ukraine sometimes overshadows events on the ground.

Speaking in Brussels, acting Prime Minister Arseniy Yatsenyuk thanked the OSCE for its plan but said Ukraine has drawn up its own “road map” for ending the crisis and noted the people of his country should settle the issue themselves.

A settlement has been elusive, as insurgents in eastern Ukraine seize police stations and government buildings. Two regions in the east have declared themselves independent after a weekend referendum, and one of them, Donetsk, has appealed for annexation by Russia.

Ukrainian forces have mounted an offensive to try to put down the armed insurgents. On Tuesday, the Defense Ministry said six soldiers were killed by insurgents who ambushed a convoy. The separatist leader in Luhansk, one of the regions that declared independence, was shot and wounded, insurgents said.

The U.S. and Western European countries accuse Russia of fomenting the unrest, with the goal of destabilizing the country or seeking a pretext to invade and seize eastern regions, which are largely Russian-speaking and the heartland of Ukrainian industry.

Western countries have slapped an array of sanctions on Russia both for its alleged role in the east and for its annexation of Crimea, the Black Sea peninsula that voted to split from Ukraine in March.

With the tensions high between Washington and Moscow, Steinmeier may be a more effective interlocutor. A senior official in the U.S. administration told The Associated Press that the U.S. had been coordinating with Germany and encouraging its leadership for a diplomatic path in Ukraine. The official spoke on condition of anonymity because of not being authorized to discuss the Ukraine crisis in public.

Putin “is far more likely to bow to pressure if it’s going to come from (German Chancellor) Angela Merkel than Barack Obama,” said Michael Geary of the Institute for European Global Studies at Switzerland’s University of Basel.

The OSCE plan, by encouraging discussion of decentralizing the government, suggests that the West sees Russia as having the upper hand. Moscow has pushed for the “federalization” of Ukraine — giving the regions more powers.

Keir Giles, a military analyst at the Chatham House think-tank in London, said that what Moscow wants is for “Russia-backed separatists to have a voice in drafting a new constitution for Ukraine, which essentially means Russia dictating what the constitution should include.”

It is unclear which representatives could be included from the separatists’ side in the discussions. Ukraine has said it will not meet with “terrorists.”

“Neither the local government nor the protesters nor armed separatists fully control the regions in the east. It’s not clear whom the Ukrainian government should be talking to,” said Kiev-based political analyst Volodymyr Fesenko.

The OSCE plan calls on all sides to refrain from violence and urges amnesty for those involved in the unrest as well as talks on decentralization and the status of the Russian language. It envisages a quick launch of high-level round tables across the country bringing together national lawmakers and representatives of the central government and the regions.

Russia called for a swift implementation of the OSCE plan, saying its demand to end violence means that Kiev should stop its military operation to recapture buildings in the east, lift its blockade of cities and towns, pull its forces from eastern regions and release all insurgents.

“We are demanding (they) stop intimidating civilians by using force or threatening to use it,” Russia’s Foreign Ministry said in a statement.

It added that it expects separatists in Ukraine’s Donetsk and Luhansk regions to respond in kind if Kiev does. However, the insurgents previously defied Putin’s call to put off the referendum and they brushed off a call to disarm and leave the buildings they occupy that was part of a conflict-resolution pact that Russia, Kiev, the U.S. and the European Union negotiated less than a month ago in Geneva.

Russia also urged the U.S. and the EU to persuade authorities in Kiev to prioritize discussions of giving more powers to Ukraine’s regions ahead of a May 25 presidential election.

With few other avenues for diplomacy available, the U.S. appears to see little harm in at least having Germany test Putin’s willingness to accept this new roadmap.

“We certainly support the efforts of our allies and partners,” White House spokesman Jay Carney said, adding that the U.S. welcomed Kiev’s efforts to move forward with the round-table discussions on constitutional reform and national unity that are a centerpiece of the OSCE plan.

The government in Kiev had been hoping the May 25 vote would unify the country behind a new, democratically chosen leadership. But Ukraine’s crisis could worsen if regions start rejecting the presidential election. The insurgents in Luhansk have already said they wouldn’t hold the balloting, and the leader of pro-Russian activists in Donetsk, Denis Pushilin, said they will use unspecified “means and methods” to prevent the vote from happening.