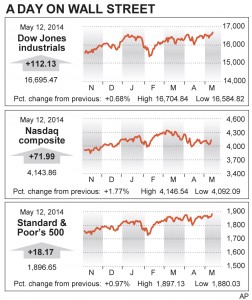 The stock market returned to record levels on Monday as investors regained their appetite for riskier stocks.

After beating down internet and small companies for two months, investors decided that those stocks had fallen enough. Among the big gainers were Twitter and Facebook, which had plunged in March and April. The Russell 2000, an index made up of small companies, climbed the most in two months.

Investors have been more cautious this year than last. They’ve favored big, less volatile stocks that pay rich dividends because of concerns about the outlook for the economy. Utility and energy companies have been among the beneficiaries of this trend, and have outperformed the overall market in 2014.

“There is some bargain buying in some of the names that got hit hard in March and April,” said Courtney

Gains on Monday were led by technology and industrial companies, sectors that are expected to benefit most if the economy starts growing faster.

Stocks also got a boost from some merger news.

Pinnacle Foods surged $4.02, or 13.2 percent, to $34.47 after the company agreed to be acquired by Hillshire Brands. Pinnacle’s brands include Duncan Hines and Aunt Jemima, while Hillshire makes Jimmy Dean and Sara Lee products. Hillshire fell $1.19, or 3.2 percent, to $35.76.

Even though stocks have largely moved sideways for most of the year following a surge in 2013, investors are still more concerned about missing the next leg of a rally than a market fall, said Doug Cote, chief market strategist, Voya Investment Management.

In government bond trading, prices fell. The yield on the 10-year Treasury note climbed to 2.66 percent from 2.63 percent on Friday.

Bond yields started falling at the start of the year as an unusually harsh winter put the brakes on the U.S. economy. They have continued to fall even as reports show the economy is strengthening again.

This article appeared in print on page 8 of the May 13th, 2014 edition of Hamodia.