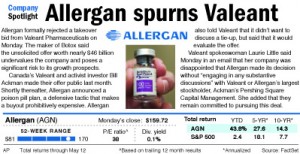 Botox-maker Allergan Inc. said it rejected a takeover bid from Valeant Pharmaceuticals International Inc., a deal the company said undervalued its worth and posed significant risks to shareholders.

Last month, the Irvine, Calif., drugmaker received an unsolicited buyout offer from Valeant and activist shareholder Bill Ackman. As a defense, Allergan adopted a poison pill strategy to slow down the potential takeover, then reportedly pursued other buyers.

Under the offer, Allergan stockholders would receive $48.30 in cash and 0.83 share of Valeant stock in exchange for a share. Allergan shareholders would own about 43 percent of the newly combined company.

Allergan Chief Executive David Pyott said the Valeant offer “does not reflect the value of the company’s leading market positions.”

“The board has determined that Valeant’s proposal creates significant risks and uncertainties for Allergan’s stockholders,” Pyott said in a statement.

In a letter to Valeant Chief Executive Michael Pearson, Pyott also said uncertainty about the Canadian company’s growth prospects and business model was a risk to its stockholders.

“Valeant’s strategy runs counter to Allergan’s customer focused approach,” Pyott wrote. “We question how Valeant would achieve the level of cost cutting it is proposing without harming the long term viability and growth trajectory of our business.”

Earlier this month, Allergan co-founder Gavin Herbert said he was worried that Valeant could slash the company’s research and development budget by as much as 80 percent. That would severely hamper Allergan’s ability to produce new drugs, and could also mean the elimination of many jobs.

This article appeared in print in the May 13th, 2014 edition of Hamodia.