Dow Inches to Record As Earnings Reports Wind Down 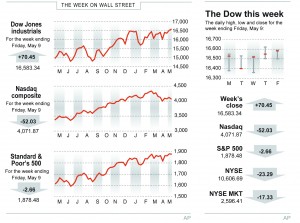 The Dow Jones industrial average hit a record on Friday, but without much conviction after a choppy day of trading during which investors couldn’t make up their minds whether to buy or sell.

The blue-chip index flitted between small gains and losses at least a dozen times, and ended up beating its old record set last week by less than 2.5 points, or just 0.02 percent.

“The market is having trouble finding direction here,” said David Kelley, JPMorgan Funds’ chief global strategist. But he added, “I believe for the rest of the year, a warming economy … will push the market up.”

The Standard & Poor’s 500 index also eked out a gain, but is no higher than it was in early March, after waffling between weekly gains and losses most of that time.

On Friday, stocks fell broadly from the open as investors took in the latest corporate earnings reports. It was an odd day in which winners became losers, and vice versa.

Stocks of utilities have been in favor lately because of their stable earnings and fat dividends, but investors dumped them Friday, and they closed 1.4 percent lower. That was the biggest drop of the S&P 500’s 10 sectors. By contrast, a few big-name internet stocks that had been crushed in a recent sell-off in that industry managed healthy gains.

CBS fell $1.27, or 2 percent, to $56.74, after reporting late Thursday that its first-quarter revenue had fallen short of analysts’ projections. Sales from advertising slumped 12 percent.

Ralph Lauren dropped $3.18, or 2 percent, to $148.81, after its forecast for sales for the current quarter disappointed investors.

Hilton Worldwide Holdings rose 43 cents, or 2 percent, to $23.07, after exceeding analysts’ expectation for earnings. And Gap rose $1.28, or 3 percent, $40.52. The clothes store chain reported strong sales for April and issued a forecast for the current quarter that was better than investors were expecting.

With most companies out with their results, first-quarter earnings for the S&P 500 are expected to rise 3.4 percent, according to S&P Capital IQ. That’s a respectable performance but still down from a nearly 8 percent gain in the fourth quarter.

Investors were also watching the situation in Ukraine. On Friday, fierce fighting in eastern Ukraine left at least seven dead. Pro-Russian militants are pressing ahead with plans for an independence referendum this weekend despite objections from Moscow.

“There is always this worry about what is the next shoe to drop,” he said. “So places we only learned about before in geography class become important: Crimea, Ukraine.”

This article appeared in print on page 8 of the May 12th, 2014 edition of Hamodia.