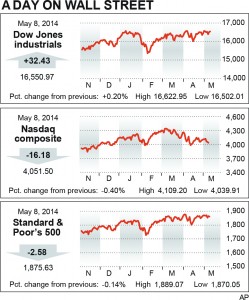 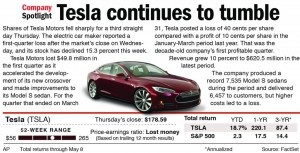 The stock market finished mostly lower on Thursday as investors assessed the latest batch of company earnings and sold utility and energy stocks.

Tesla, a maker of electric cars, fell after reporting a first-quarter loss and saying it would need to invest more in its business.

Companies that pay steady dividends and have a long record of profitability, such as utilities, have surged this year, benefiting from a shift in sentiment as investors sold previously high-flying Internet and small-company stocks. A sell-off in these stocks could be a troubling sign for the overall market.

“The market’s still pretty sloppy,” said Quincy Krosby, a market strategist at Prudential Financial. “The fear in the market is that the selling spreads to the defensive stocks, the safe havens and that could bring down the whole market.”

Stocks had started the day higher as investors looked over earnings reports and after some encouraging news on hiring.

The U.S. government reported that the number of Americans seeking unemployment benefits fell 26,000 last week to 319,000, the latest sign that the job market is slowly improving. The drop follows two weeks of increases that reflected mostly temporary layoffs around the Easter holiday.

Keurig Green Mountain was among the big gainers after report earnings.

The maker of specialist coffees climbed $11.98, or 13 percent, to $104.19 after its earnings exceeded analysts’ estimates. Keurig, known for its single-serve coffee brewing system, said late Wednesday that its net income climbed 22 percent in its fiscal second quarter.

Twenty-First Century Fox was another winner. The company’s stock rose $2.10, or 6.5 percent, to $34.22 after it also reported earnings that surpassed analysts’ expectations.

Tesla was among the day’s losers.

The company, which makes electric cars, reported a $49.8 million first-quarter loss late Wednesday and said that spending on investments would weigh on earnings later this year. Tesla now sells only one car, the Model S, which starts at $70,000, but it’s working on two other vehicles, an electric crossover SUV called the Model X and a lower-cost model.

Almost 90 percent of companies in the S&P 500 have now reported first-quarter earnings.

Overall earnings are expected to grow by 3.3 percent in the quarter, according to data from S&P Capital IQ. That compares with growth of almost 8 percent in the fourth quarter of 2013 and 5.2 percent in the same period a year ago.

Revenue also grew in the first quarter, rising 3.3 percent versus 1.6 percent growth in the fourth quarter, a positive sign that companies are experiencing stronger demand. Some investors believe that companies are still relying too much on cost-cutting to generate earnings growth.

“Those kind of cost-reduction strategies only go so far before you do need to have more top-line growth, and it remains to be seen whether companies can continue to grow in what remains, by many measure, a slow-growing economy,” said Tom Karsten, chief investment officer at Karsten Advisors, a financial adviser and investment management company.

Government bond prices fell. The yield on the 10-year Treasury note climbed to 2.61 percent from 2.59 percent on Wednesday. The yield, which is used to set interest rates on loans including home mortgages, is near its lowest level of the year.

— Ford gained 35 cents, or 2.3 percent, to $15.81 after the automaker said it will buy back up to $1.8 billion of its own stock. Ford says the buybacks will help offset potential dilution from convertible debt and stock-based compensation for employees.

— Twitter, which has endured a rough ride since surging on the first day of its initial public offering in November, rose $1.30, or 4.2 percent, to $31.96. The social media company’s stock has plunged 52 percent since February.

This article appeared in print on page 8 of the May 9th, 2014 edition of Hamodia.