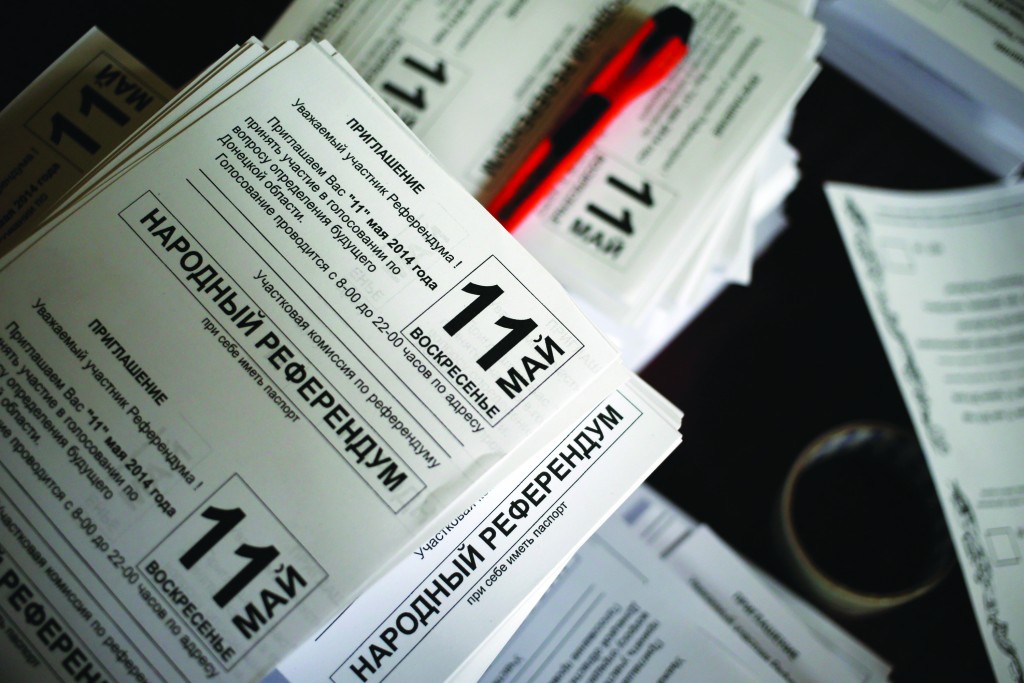 The photocopy machines churning out the ballots for eastern Ukraine’s sovereignty referendum have been clattering around the clock for days. Even the powerful Vladimir Putin can’t stop them.

Despite the Kremlin leader’s plea to postpone Sunday’s vote, the pro-Russia rebels in Ukraine who call themselves the Donetsk People’s Republic said they’ll go ahead with the referendum.

Support for the referendum is most pronounced among eastern Ukraine’s proudly Russian-speaking working class. Rage against the central government that came to power after months of Ukrainian nationalist-tinged protests is blended with despair at Ukraine’s dire economic straits and corruption.

Along with the vote in the eastern Donetsk region, a similar and even more hastily improvised referendum is due to take place Sunday in the neighboring Luhansk region. Together they have about 6.5 million people.

The referenda are similar to the one in Crimea in March that preceded Russia’s annexation of that strategic Ukrainian Black Sea peninsula. Like the one in Crimea, they are regarded as illegitimate both by Kiev and the West.

But unlike the Crimean vote, which was held as Russian soldiers and affiliated local militias held control of the peninsula, the eastern referenda take place amid armed conflict. And, critically, unlike Crimea, whose majority Russian-speaking population made approval a foregone conclusion, the Donetsk and Luhansk regions have a more mixed population.

A poll by the Washington-based Pew Research center released on Thursday found that 70 percent of the residents of Ukraine’s east want Ukraine to maintain its current borders. That suggests the referenda have a chance of failing, if opponents turn out in force and the count is honest.

However those opposed to the referendum seem likely to ignore it. Some have grown desperate at the anarchy in eastern Ukraine.

“This is a madhouse. That isn’t a particularly literary word, I know, but there is no better way to put it. People are killing one another and we don’t know why,” said 58-year-old retiree Svetlana Amitina.

Putin’s surprise call on Wednesday for the referendum to be put off appears to reflect Russia’s desire to distance itself from the separatists. The West and the Ukrainian government accuse Russia of supporting or outright directing the unrest in the east, while Moscow denies involvement.