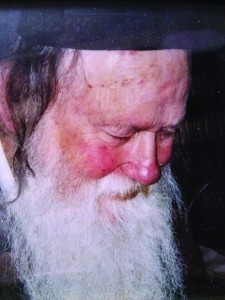 A huge crowd estimated at some ten thousand people, headed by Gedolei Torah and residents of Yerushalayim, accompanied Harav Zundel Kroizer on his final journey yesterday. Harav Kroizer was one of the eminent tzaddikim of Yerushalayim, author of Sefer Ohr Hachamah. He passed away yesterday at the age of 91.

Reb Zundel was born in Yerushalayim on 28 Cheshvan 5684/1924. His father, Harav Tzvi Hersh Kroizer, zt”l, was known as a tzaddik and oved Hashem. Father influenced son with his love for Torah and Yiras Shamayim, and Reb Zundel, in turn, conveyed this influence to multitudes of others in his generation, who absorbed his burning love for Torah and avodas Hashem.

Reb Zundel learned in Yeshivah Eitz Chaim and was known from a very early age as a diligent masmid, and as a wondrous figure among Yerushalayim Prushim community.

From his youth until his final
years, he upheld the three pillars of the universe with great mesirus nefesh: Torah, avodah and gemilus chessed. There was nothing in this world that stood in the way of his Torah learning, his tefillah and his chessed. His life was one constant chain of Torah learning and mitzvos, with holiness and purity and great humility.

Reb Zundel married the daughter of Harav Aharon Porush, zt”l, the treasurer of Eitz Chaim, a renowned talmid chacham and author of Eiphah Shleimah on Shas. He also printed the sefer of his brother, who was a mekubal, and raised families of orphans. Harav Porush died some 50 years ago on the same date as his son-in-law.

For many years, Reb Zundel was a melamed in Talmud Torah Kamenitz, and later in the cheder in Meah Shearim. For a time, he taught in Talmud Torah Tashbar and the Belzer cheder in Bnei Brak. One year, he was asked to establish a school in Lugano, Switzerland, and he invested a year of his life doing so. In the last 25 years, he was one of the most respected figures
in Yeshivas Tchebin in Yerushalayim. His official job was to answer any questions the bachurim had in their learning but in essence, he was a role model for the bachurim who saw how a Yid lives a life entirely of Torah.

He was a fount of Torah. He authored the sefarim Ohr Hachamah on all of Shas, Shulchan Aruch, the five Chumashim, the siddur and Haggadah Shel Pesach. His commentary was comprehensive, and he didn’t suffice with a few subjects in each masechta, but rather, covered the masechta from beginning to end.

He davened vasikin his whole life, and spent the rest of his day learning or teaching. There were those who described him as a walking Shulchan Aruch.

For most of his life, he lived in the Knesset neighborhood. Some 10 years ago, his Rebbetzin passed away and, in recent years, he lived in the home of his son, Reb Yosef, shlita, on Rashi Street in Yerushalayim. His son and his entire family were extremely devoted to Reb Zundel, and treated him with the greatest respect.

Reb Zundel merited clarity of mind until his final day. He recently fell ill and many tefillos were offered for his recovery. Yesterday, he passed away at Shaare Zedek Hospital.

The levayah then continued to Har Hamenuchos.

Reb Zundel leaves behind a generation of talmidei chachamim and marbitzei Torah, children, grandchildren and great-grandchildren following in his path.

This article appeared in print on page 1 of the May 9th, 2014 edition of Hamodia.