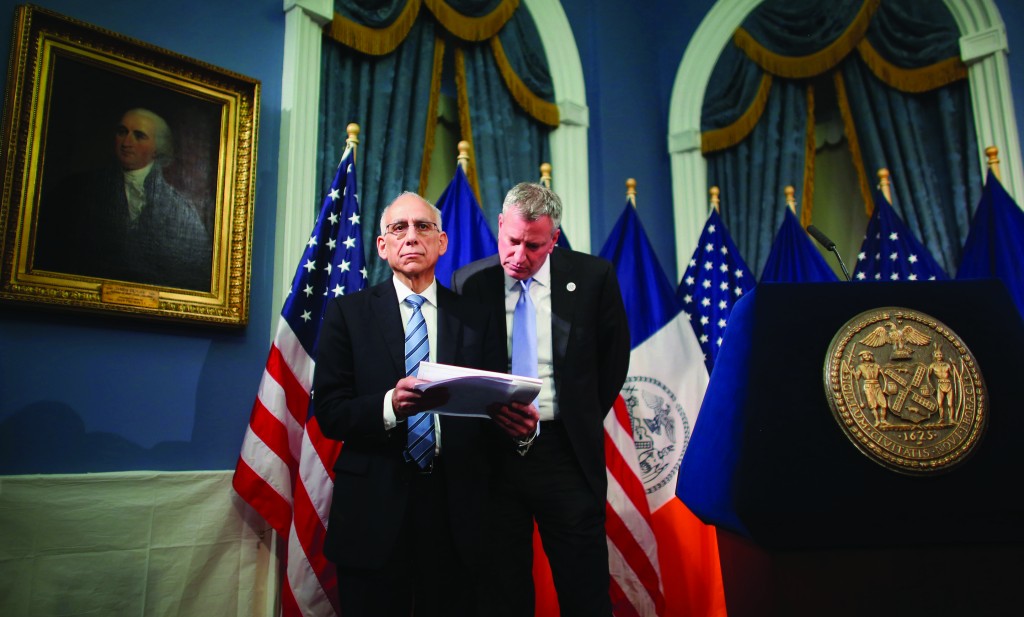 De Blasio, who turned 53 on Thursday, devoted much of his financial resources to creating a budget — which now will be subject to negotiations with the City Council and must be approved by July 1 — that backs up the campaign promises that ushered him into office in January, when he became the city’s first Democratic mayor in a generation.

His signature campaign pledge was to fund universal prekindergarten and expanded after-school programs for middle-schoolers with a tax hike on the city’s wealthy. When that idea died in Albany, the state stepped in with $300 million for pre-K but little for the after-school programs, prompting the mayor to propose spending $145 million to expand programs for 100,000 children.

A small portion of that money, $1.7 million, will be geared specifically to help large Orthodox families who were on the Priority 7 after-school voucher program that was yanked in 2010.

Afterschool vouchers are given to large families for supervised extracurricular activities on a sliding scale. Families under social service supervision are given higher priority, but many Orthodox families have qualified for some of the other priorities.

For example, Priority 5 benefits families where both parents work at least 20 hours a week but are within poverty guidelines. Priority 7 is for those with significant needs, such as large families, where only one parent works.

While de Blasio said he remains committed to restoring both programs in full — a promise repeatedly made over the past few months — he said on Thursday that a lack of funding forced him to postpone his promise for another year.

“The afterschool program will, in its own way, reach some of the same families, unquestionably,” de Blasio said in response to a reporter’s question. “But, as I’ve said, a lot of the things I want to work on over time — some we could do in this budget, some will take more time.”

Avi Fink, a deputy chief of staff in the de Blasio administration, told Hamodia that about one-fourth of the families who were on Priority 7 will regain funding for the coming school year.

Only 600 of the original 2,600 slots will be restored for the next budget year. But Fink added that he expects that by the time the budget is passed by the council in July, an additional 800 slots — for a total of 1,400 placements — will be there.

Parents who were eligible for Priority 7 vouchers will be notified next year that they can apply for this new funding stream. It will then be allocated on a first come, first serve basis.

In a statement released after de Blasio’s presentation, state Sen. Simcha Felder, a former councilman who represented parts of Boro Park together with de Blasio, recalled the budget battles the mayor waged to keep the vouchers from elimination.

“During our many years in the city council, Mayor Bill de Blasio and I worked together tirelessly to restore voucher funding every year,” said Felder, a Brooklyn Democrat who chairs the subcommittee for New York City education. “I am pleased that today’s executive budget reflects a partial restoration and a commitment by the mayor to this important program.”

Saying that he considers the few hundred slots reinstated a “deposit” on the promises made to fully restore the program this year, Felder said it was now up to Councilmen David Greenfield and Stephen Levin, who represent Boro Park and Williamsburg, respectively, as well as Speaker Melissa Mark-Viverito, to “work together with the mayor to ensure that families continue to receive uninterrupted child care vouchers.”

Greenfield said in a statement released to Hamodia that he intends to add to the slots proposed by de Blasio.

“While [600 slots] is a good start,” he said, “the need is significant and my colleagues and I will be pushing to increase that number before the final budget is adopted.”

Reflecting the city’s improving fiscal outlook, the budget is full of new expenditures with little in the way of new savings or revenue. De Blasio is adding $70 million to the housing authority’s repair budget and increasing services for the homeless.

De Blasio repeatedly peppered his remarks with the need to do more for the poor and working class but vowed to be fiscally prudent in preparing a budget larger than those used by the majority of U.S. states.

“There are some that have trouble equating fiscal responsibility with progressive values,” he said. “If you believe in the positive role of government, as I do, then you need a strong and stable foundation.”

The overall budget, which updates a preliminary version released in February and comes a week after the council released its own budget recommendation, also contains spending increases for infrastructure and road repair, in the wake of a brutal winter that wreaked havoc on city roadways. The mayor also wants to spend more on a series of steps, from speed cameras to speed bumps, aimed at reducing pedestrian deaths in the city, a program he started that is called Vision Zero.

De Blasio also plans to ease some fines for small business, another campaign promise of his, which will mean an 8 percent drop in that revenue, from $859 million to $789 million.

Looming over the city’s fiscal picture are the expired contracts of 153 unions, only two of which were settled in recent months. But de Blasio believes that the $5.5 billion tentative agreement with teachers reached last week sets a pattern for negotiations with other unions that the city can afford, particularly if the $3.4 billion expected savings on health care can be reached.

But some unions have already demanded larger raises than the ones the teachers received. Moreover, the budget’s relatively rosy projects for the next few years do not account for the bulk of the $4.3 billion in retroactive pay due the teachers, which won’t begin being paid out until 2019.

De Blasio warned that the city’s fiscal outlook still faces challenges. His team projects New York will face a $2 billion structural deficit for the fiscal year that begins in July 2015.

“We are sober about what we need to address,” he said.

The process has been far less rancorous than the battles that dominated the final budgets of the Bloomberg era. Those were marked by the so-called “budget dance” in which Bloomberg would propose cutting services such as firehouses and libraries and then the Democrat council would restore them. The council now is allied with de Blasio.

However, there were areas of disagreement. In the council’s April budget proposal, it advocated for free school lunches, an idea that de Blasio did not include in his plan. The mayor also rejected the council’s proposal to hire 1,000 new cops, saying that the NYPD’s current 35,000-person headcount was keeping crime low.

(With reporting by The Associated Press.)