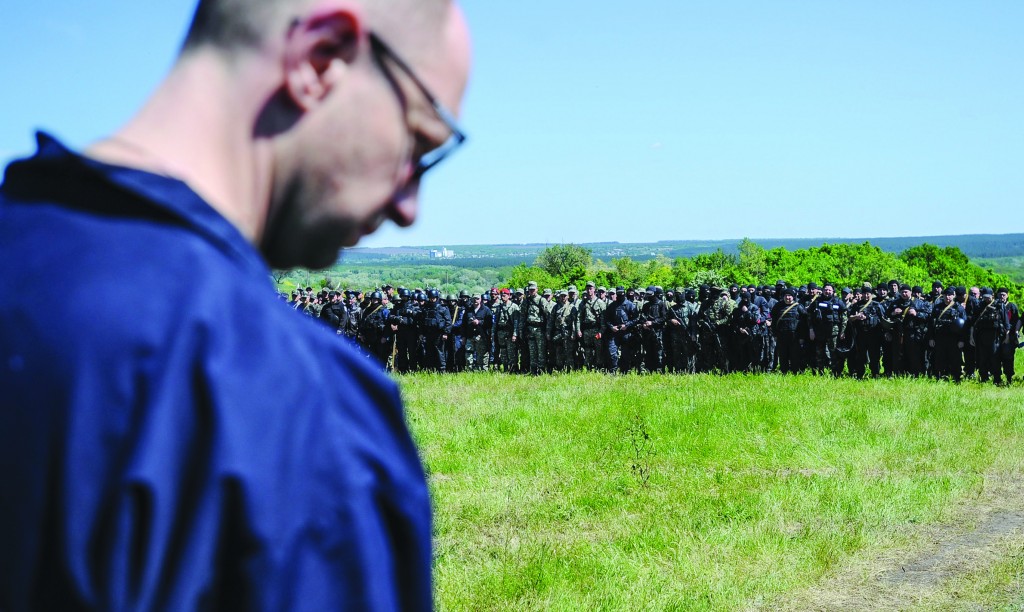 Russian President Vladimir Putin softened his tone in the confrontation with the West on Wednesday, declaring that Russia has pulled its troops away from the Ukrainian border and calling for a delay of Sunday’s referendum on autonomy in Ukraine’s restive east.
But there were no immediate signs that either move was truly happening or that they would cool the Ukrainian crisis. NATO and Washington said they saw no indication of a Russian pullback, and the pro-Russia insurgents behind the referendum have not agreed to go along with Putin’s proposal.

In a Moscow meeting with Swiss President Didier Burkhalter, Putin said Russian troops have been pulled back to their training grounds and locations for “regular exercises,” but he did not specify whether those locations were in areas near its border with Ukraine.

A Russian Defense Ministry spokesman declined to say where the troops were now positioned.

Putin also reiterated Russia’s demand that Ukraine’s military halt all operations against the pro-Russia activists who have seized government buildings and police stations in at least a dozen towns in eastern Ukraine.

Ukraine launched an offensive late last week to take back the buildings and towns under insurgent control. At least 34 people, including many rebels, have died in that offensive, the government said.

Many had feared that Sunday’s vote would be a flashpoint for further violence between the rebels and Ukrainian troops. Insurgents were calling the ballot a vote on giving regions more autonomy, but Kiev authorities feared it could be a pretext for separatists or those who want the region to join Russia.

Russia annexed Ukraine’s Black Sea peninsula of Crimea in March after residents there held a vote and overwhelmingly backed secession.

Despite Putin’s call to delay the referendum, many Donetsk residents appear eager to go ahead with the vote.

“That Putin’s personal opinion. He’s a very wise man, but we have decided to do things our own way: to become the Donetsk Republic,” said Ludmila Radchenko, 52, standing in a city square.

If the insurgents go ahead with the referendum, it could bolster Moscow’s insistence that it is not directing the unrest. But it could also anger Western countries and increase the pressure for additional sanctions against Russia.

Ukraine, meanwhile, is holding a nationwide presidential election on May 25.

Ukrainians “cannot be bullied out of having their elections by disorder that is deliberately fomented and coordinated from another country, in this instance Russia,” Hague said.