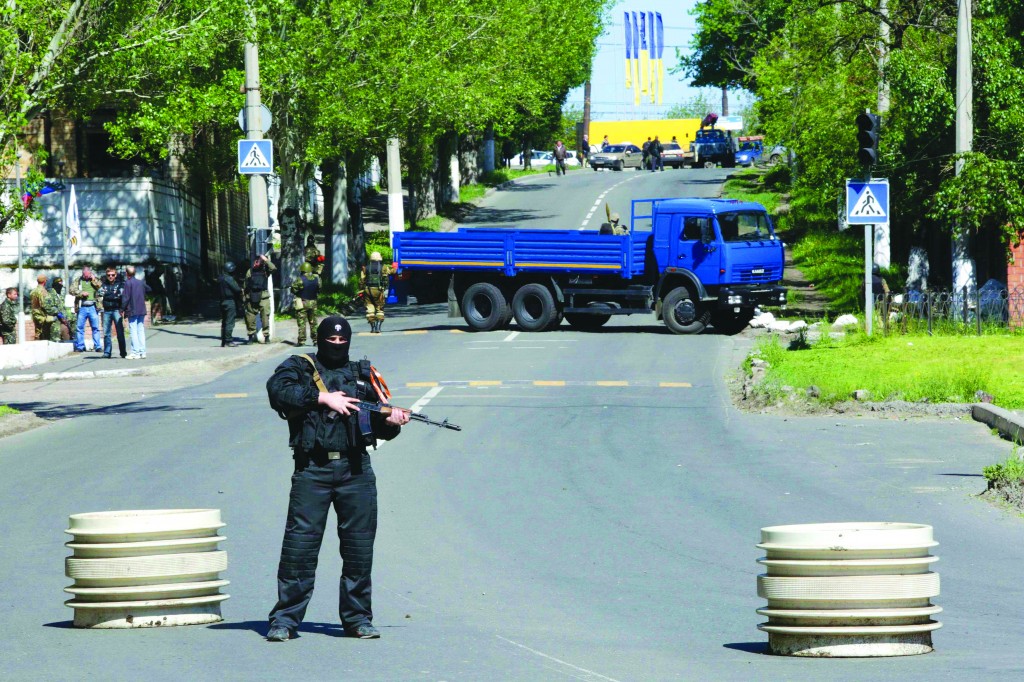 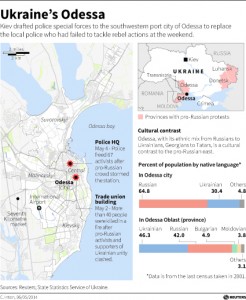 A pro-Russia militia holding an eastern Ukrainian city came under further pressure Tuesday from advancing government troops, but militants acted with impunity elsewhere in the turbulent region.The foreign ministers of Ukraine and Russia met Tuesday, but their open disagreements did nothing to suggest a diplomatic solution was near.

Diplomacy was to be taken up again on Wednesday during a meeting in Moscow between Russian President Vladimir Putin and Swiss President Didier Burkhalter, whose country currently chairs the Organization for Security and Cooperation in Europe. Russia and the West have expressed a desire for the OSCE to play a greater role in defusing the tensions in Ukraine.

Ukrainian military operations that began Monday to expunge pro-Russia forces from the city of Slovyansk were the interim government’s most ambitious effort so far to quell weeks of unrest in Ukraine’s mainly Russian-speaking east.

Four government troops and 30 militants were killed in the gunbattles, Ukraine’s interior minister said Tuesday. The pro-Russia militia said 10 people were killed, including civilians. There was no immediate way to reconcile the figures.

In the southwest, Kiev authorities also attempted to reassert control over the region around Odessa, a major Black Sea port, by appointing a new governor on Tuesday.

This nation of 46 million was thrown into a political crisis after its Moscow-leaning president, whose base was in eastern Ukraine, fled to Russia in February following months of protests in Kiev. Across the region in recent weeks, armed insurgents who have seized dozens of government buildings and police stations are now at odds with western and central Ukraine, which seek closer ties with Europe and largely back the government in Kiev.

Interior Minister Arsen Avakov gave the death toll Tuesday, adding that 20 government troops were also injured during fighting in Slovyansk. He said about 800 pro-Russia forces in and around Slovyansk used large-caliber weapons and mortars on Monday.

By Tuesday morning, Ukrainian forces had taken hold of a key checkpoint north of the city, dealing a blow to insurgent lines of communication.

In Donetsk, a major city 120 kilometers (75 miles) south of Slovyansk, the airport was closed during the day to international flights following a government order but reopened later.

In the afternoon, about 30 pro-Russia militants armed with automatic rifles and grenade launchers surrounded an Interior Ministry base in Donetsk, demanding that the troops inside not join any government operations against pro-Russia forces. While it was unclear whether they would attack, besieging the base was an uptick in their offensive.

In Odessa, Kiev authorities announced Tuesday they were firing the acting governor and replacing him with a member of parliament, Ihor Palytsya. Odessa’s police chief was also fired over the weekend.

Concern that Odessa could be the next region to fall grew after 46 people died Friday, many in a building fire, after a pro-Ukraine march in Odessa turned into a melee of fighting. Two days later, 67 people detained in the rioting were released by police under pressure from an angry crowd.

Opposing sides of the Ukraine conflict have traded bitter recriminations over the Odessa deaths. As residents gathered on Tuesday to lay flowers near the scorched building, they remained confused about exactly what caused the fire and were suspicious of the police forces who did not try to stop the bloodshed, for whatever reason.

“I saw how the police were on the side of the pro-Russians — they broke rank when the Russians attacked and closed ranks when they stepped back,” said 46-year-old Vitaly Khadyko.

The central government attempted to boost confidence by sending in an elite national guard unit, which could be seen patrolling the streets of Odessa.

The goals of the pro-Russian insurgency are ostensibly broader autonomy for the region, but some do favor separatism or even joining Russia.

Leaders of the anti-government movement say they plan to hold a referendum on autonomy for eastern regions on Sunday, although no visible preparations for the vote have yet been seen.

In Washington on Tuesday, Secretary of State John Kerry discussed the Ukraine crisis with Catherine Ashton, the European Union’s top diplomat. The U.S. and the EU ordered sanctions against Russian officials and individuals after Moscow annexed Ukraine’s Crimean Peninsula in March.

Testifying Tuesday on Capitol Hill, Victoria Nuland, the top U.S. diplomat for Europe, said a team of U.S. officials was working with European counterparts on sanctions that could target Russian industry sectors. She said she would go to Brussels on Monday to discuss them.

Ukrainian authorities have blamed Moscow for fomenting the unrest in the east, saying it’s an attempt to derail Ukraine’s May 25 presidential election.