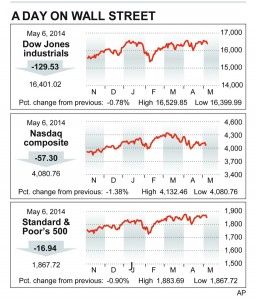 Twitter dropped 18 percent after company insiders were allowed to sell stock for the first time since the initial public offering last year. Netflix fell 5 percent, Facebook and Amazon, 4 percent each, and Google, 2 percent.

Nine of the 10 industry groups in the Standard and Poor’s 500 fell, led by a 1.4 percent drop in financial companies after results for insurer American International Group fell short of analysts’ expectations. Home builder stocks dropped after more signs of weakness in the housing market.

Jack Ablin, chief investment officer of BMO Private bank, says investors are worried that corporate results over the next few quarters will not justify the surge in prices from the start of 2013.

“We ran ahead of fundamental valuations, based on revenue and earnings,” Ablin said. “Either revenue or earnings have to catch up to the market, or prices have to come down.”

Even utilities — the biggest winners so far this year, up 12 percent — did not escape the selling. They slipped 0.5 percent.

The drop in the S&P 500 and the Dow Jones index was the third in four trading days, and comes despite recent upbeat news on the U.S. economy. Payrolls increased by 288,000 last month, the fastest pace since 2012.

Companies in the S&P 500 index are expected to have increased earnings by 2.6 percent in the first quarter, according to S&P Capital IQ, a data provider. That is down sharply from the nearly 8 percent jump in the fourth quarter.

U.S. home prices rose at a slightly slower pace in the 12 months that ended in March, according to data provider CoreLogic. It was another sign that weak sales, caused in part by rising mortgage rates, have begun to restrain the housing market’s sharp price gains.

American International Group fell $2.18, or 4 percent, to $50.54. The company reported revenue that was below what investors expected due to higher catastrophe losses and lower investment income. Investors were also keeping an eye on the turmoil in Ukraine.

U.S. government bond prices rose slightly. The yield on the 10-year Treasury note fell to 2.59 percent from 2.61 percent Monday. The yield has fallen from 3 percent at the start of January.

In other stocks making big moves:

• Office Depot soared 66 cents, or 16 percent, to $4.83 after reporting adjusted profits for the first quarter that were twice as high as analysts expected. The company also said it would close at least 400 U.S. stores after its merger with OfficeMax resulted in the overlap of retail locations.

• Discovery Communications fell $3.06, or 4 percent, to $74.71 after reporting a gain in first-quarter revenue that was lower than analysts expected.

• Merck fell $1.52, or 2.6 percent, to $57.11 after the drug company agreed to sell its non-prescription medicine and consumer-care business to Germany’s Bayer for $14.2 billion. Products in that business include Claritin allergy pills, Coppertone sunscreen and Dr. Scholl’s footcare products.

• Whole Foods Market tanked $7.07, or 15 percent, to $40.83 in after-hours trading. Quarterly profit at the upscale grocer fell short of expectations as rivals have sped up their own organic and natural offerings. The company also cut its profit outlook for the rest of the year.

This article appeared in print on page 34 of the May 7th, 2014 edition of Hamodia.