ANALYSIS: Slowing Chinese Economy Likely to Pinch US, Too

By Paul Wiseman and Joe McDonald 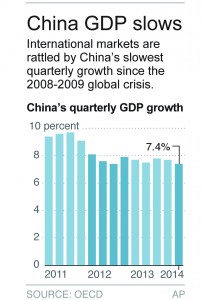 After watching China narrow the U.S. lead as the world’s largest economy, Americans might be tempted to cheer signs that the Chinese economy might be stumbling.

But any schadenfreude would be short-sighted.

In an interconnected global economy, bad news for one economic superpower is typically bad news for another – even a fierce rival.

“It hurts,” says Mark Zandi, chief economist at Moody’s Analytics. “China is the second-largest economy on the planet. If growth slows there, it affects everybody.”

Zandi estimates that each percentage-point drop in China’s economic growth causes as much damage to the U.S. economy as a $20-a-barrel increase in oil prices: It shaves 0.2 percentage points off annual U.S. growth.

That isn’t catastrophic. But to regain its full health nearly five years after the Great Recession officially ended, the U.S. economy needs whatever help it can get.

A sharp slowdown in China also threatens the 28-member European Union, which outweighs even the United States if measured as a single economy. China is the EU’s second-largest export market behind the United States.

A stream of economic news from China has been rattling financial markets. Chinese manufacturing slowed in April for a fourth straight month. A Chinese lending bubble, driven by overbuilding, is stirring alarm. China’s growth in the January-March quarter slowed to 7.4 percent compared with a year earlier. It was its slowest quarterly growth since the 2008-2009 global crisis.

For most economies, 7.4-percent growth would qualify as explosive. The U.S. economy hasn’t grown as fast as 7 percent since 1984. But for China, a still-developing economy that clocked double-digit growth through much of the 2000s, the latest figures qualify as a slump.

And Americans and Chinese are linked ever more tightly economically.

They buy each other’s products, invest in each other’s markets and visit each other’s tourist attractions. U.S.-China trade in goods last year totaled $562 billion. China is the United States’ second-biggest trading partner and the No. 1 source of U.S. imports, according to the Congressional Research Service.

– The number of Chinese visitors to America jumped 23 percent last year, to 1.8 million. And the Chinese spend an average of about $6,000 a visit – more than tourists from any other country. “Shopping is the No. 1 activity for Chinese tourists,” says Jolin Zhou of Sunshine Travel, a Boston travel agency that specializes in Chinese tourists.

– Chinese investment in U.S. businesses, factories and real estate – tangible things, not including stocks, bonds and other financial instruments – has gone from virtually nothing a decade ago to $14 billion last year, according to the Rhodium Group, a consultancy. More than 70,000 Americans work at Chinese companies in the United States, up from almost none in 2000.

China’s economy is slowing as it shifts away from growth based on exports and investment in real estate and factories, and toward growth fueled by consumer spending. The country is also contending with a surge in debt fueled by loans from state-owned banks. Outstanding credit has surged from the equivalent of 130 percent of China’s economy in 2008 to 200 percent last year, according to Capital Economics.

In Europe, companies are vulnerable to a further slowdown in China because of how much their trade there has expanded. China is especially key for Germany’s three luxury automakers – Daimler’s Mercedes brand, Volkswagen’s Audi and BMW. China is now a far larger market for BMW than is the United States.

Some European carmakers have gone so far as to adjust their models to cater to Chinese customers, such as stretching the chassis and sumptuously outfitting rear seats on the assumption that the car’s primary user might have a chauffeur.

Nevertheless, U.S. companies still see lucrative opportunities and are betting that Chinese authorities can continue to manage a healthy pace of growth.

Many U.S. companies plan to take advantage of a Chinese government push to clean up the environment and make the economy more energy-efficient. General Electric is selling China cleaner power plants that run on methane. Covanta, of Morristown, New Jersey, operates one plant that turns garbage into power in the province of Sichuan and another in the province of Jiangsu. NanoH2O Inc., based in El Segundo, California, is building a factory west of Shanghai to produce membranes for filtering sewage or brackish water. It’s due to open late this year.

Chinese leaders see the scarcity of clean water as a strategic weakness and possible source of political unrest. China accounts for one-fifth of the world’s population but has only about 6 percent of its drinkable water.

“The market opportunity here is so large, and we felt that we wanted to be in a position to really take advantage of that opportunity and to build a plant large enough to export globally,” says Jeff Green, CEO of NanoH20.

This article appeared in print in the May 7th, 2014 edition of Hamodia.