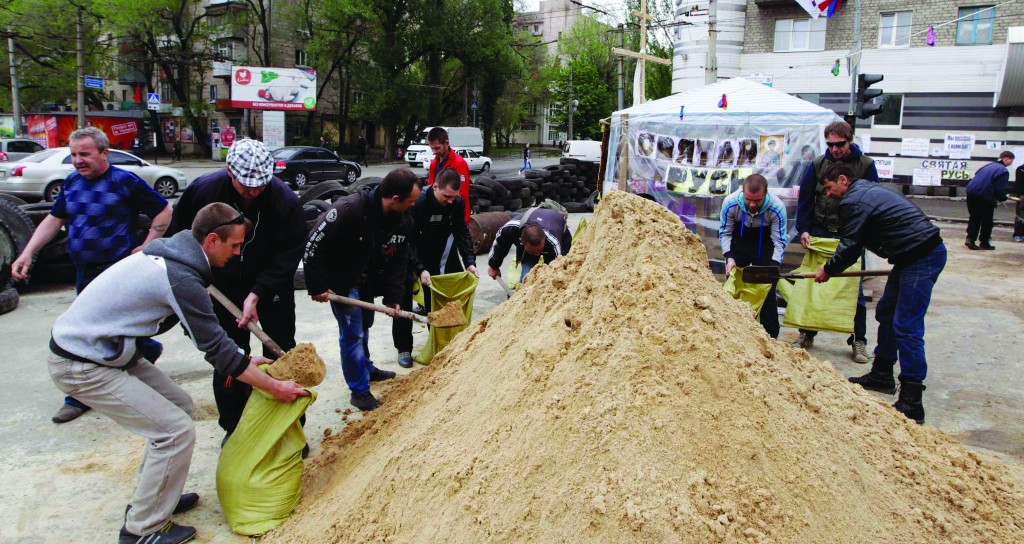 Pro-Russian rebels shot down a Ukrainian helicopter in fierce fighting near the eastern town of Slaviansk on Monday, and Kiev drafted police special forces to the southwestern port city of Odessa to halt a feared westward spread of rebellion.

Ukraine said the Odessa force, based on “civil activists,” would replace local police who had failed to tackle rebel actions at the weekend. Its dispatch was a clear signal from Kiev that, while tackling rebellion in the east, it would vigorously resist any sign
of a slide to a broader civil war.

Odessa, with its ethnic mix from Russians to Ukrainians,
Georgians to Tatars, a cultural contrast to the pro-Russian east, was quiet on Monday. Ukrainian flags flew at half mast for funerals of some of the dozens killed in clashes on Friday.

But in the east, fighting intensified around the pro-Russian stronghold of Slaviansk, a city of 118,000, where rebel fighters ambushed Ukrainian forces early in the day.

The sound of an air-raid siren could be heard in the center of Slaviansk, and a church bell rang in the main square.

Russia’s foreign ministry called on Kiev to “stop the bloodshed, withdraw forces and finally sit down at the negotiating table.” It also published an 80-page report detailing “widespread and gross human rights violations” in Ukraine over the past six months for which it blamed the new government and its Western allies.

Russia denies Ukrainian and Western charges it is seeking to undermine the country of 45 million and using special forces to lead the insurgency, as it did before annexing Crimea in March.

“I’m convinced we are struggling against a situation that has taken on a dynamic of its own. There are groups in eastern Ukraine that are not listening to either Kiev … or Moscow.”

Ukraine’s Defence Ministry said rebels had shot down a military helicopter, the fourth since Friday, with heavy machine gun fire. The helicopter crashed into a river and the crew was rescued but there were no details of their condition.

The violence in Odessa marked a watershed for Ukraine.

It increased fears that trouble could spread to the capital in the approach to Friday’s celebrations of the Soviet victory in World War Two, an event that could kindle tensions over Kiev’s relations with its former communist masters in Moscow.

Over 40 people were killed in Friday’s clashes, the worst since pro-Moscow president Viktor Yanukovich fled to Moscow in February amid protests by Ukrainians demanding closer ties to Europe. Most were pro-Russians killed when the building they occupied was set ablaze by petrol bombs.

Loss of control of Odessa would be a huge economic and political blow for Ukraine, a country the size of France that borders several NATO countries and aspires to join the military alliance, a primary source of concern for the Kremlin.

A city of a million people, with a grand history as the cosmopolitan southern gateway for the tsars’ empire, Odessa has two ports, including an oil terminal, and is a transport hub.

Many on the city’s streets were shocked by the violence.

“People who brought this to our city were not and are not and will not be true citizens of Odessa,” said Alexei, 40, an ethnic Russian. “We are Odessa, and this is a special place.”

Rabbi Fishel Chichelnitsky, a Rabbi in Odessa’s 70,000-strong Jewish community, said: “I’m hoping these deaths serve as a stern warning to everyone that this is not a game.”