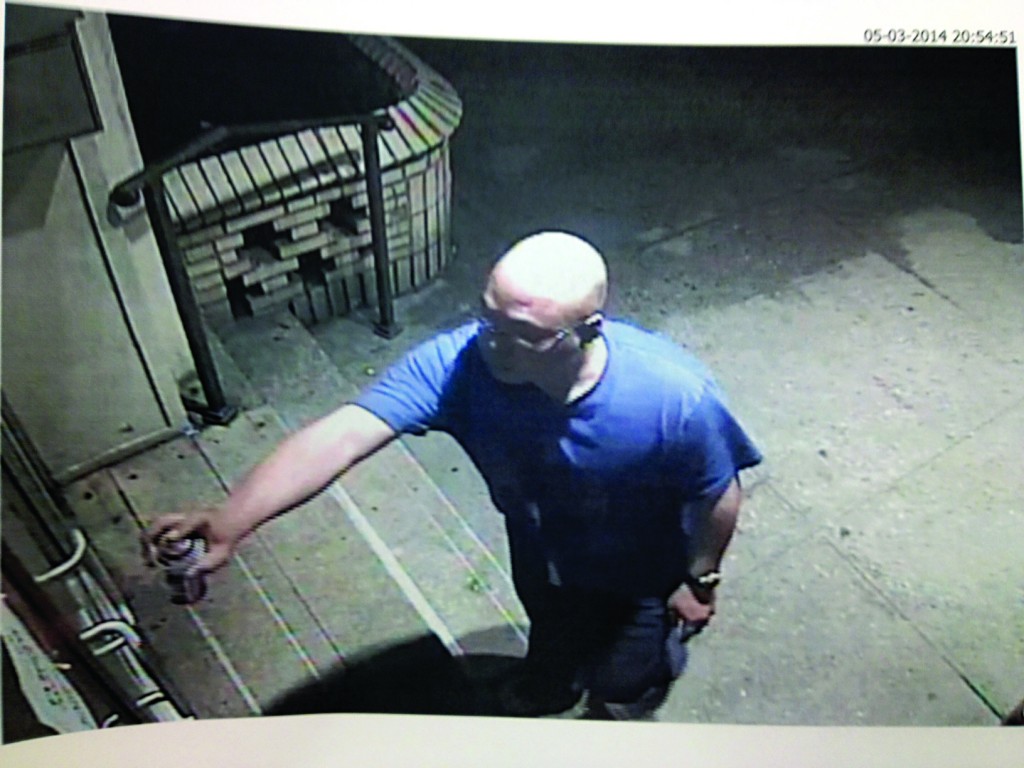 A former New York City police officer was arrested before dawn Sunday on charges he spray-painted anti-Semitic graffiti on about 20 cars and buildings across Boro Park — including the front doors of an elementary school.

Michael Setiawan, an Indonesian immigrant, was picked up after police received a 911 call early Motzoei Shabbos about the swastikas and other anti-Semitic vandalism. The 36-year-old faces charges of criminal mischief and aggravated harassment as hate crimes.

Setiawan was a city officer until 2007, serving in Brooklyn’s 69th precinct in the Canarsie neighborhood, police said.The spray-painted words were found on 15 vehicles and four buildings near Bobov’s Bnos Zion girls school. Many of the scrawls were found along Dahill Rd. and 37th St., and 14th Ave. near 38th St. A surveillance camera at the school captured the suspect as he was spray-painting.

The key to cracking the case came when a child who witnessed the perpetrator in action memorized part of the license plate number, and then called Shomrim, according to state Sen. Simcha Felder.

“This is a classic example of the importance of community involvement and the need to speak up if you see something suspicious,” said the Brooklyn Democrat.

Councilman David Greenfield termed the arrest of a former cop on hate crime charges “shocking,” and called for the maximum punishment.

“It is unconscionable that someone would spray such hateful graffiti across our community,” Greenfield said. “The crime is only more appalling that it was done on the holiest day of our week.”

Councilman Brad Lander praised the quick arrest by police, while condemning the attack.

“I’m outraged by these hate-filled, anti-Semitic acts. Hatred has no place in our city,” said Lander, who added “big thanks” to the NYPD and the Hate Crimes Task Force who “moved quickly, worked through the night, and made an arrest early this morning.”

Setiawan and his parents share a home in Queens. His father told The Associated Press that he was awakened at 5 a.m. Sunday by a call from police. Thomas Setiawan then went to his son’s room and roused him. Minutes later, a detective showed up to arrest his son.

“I asked my son, ‘What’s wrong? What happened? Is anybody hurt?’” the Indonesian immigrant said in a telephone interview, his voice rising with emotion in heavily accented English. “He said ‘No, don’t worry, nobody’s hurt.’”

But people did get hurt, said state Assemblyman Dov Hikind, who represents the area.

“This was not a victimless crime,” Hikind said. “We have many Holocaust survivors here, many elderly people and children who are appropriately frightened by unprovoked hate attacks upon their schools and community. Hate attacks on our community will not go unpunished.”

Thomas Setiawan said his son asked him for the keys to the family car around 8 p.m. Saturday, saying he’d left something inside.

“Then we looked out, and the car was gone,” the elder Setiawan said, adding that he and his wife became worried.

He said their son has had mental health issues and that he was depressed and suicidal after leaving the police force. They didn’t know why he was no longer an officer; he told them only, “I want to quit.”

Before joining the force, Michael Setiawan had been laid off from a job at a Long Island cosmetics factory.

On Sunday morning, after he was led away by police, his father said he and his wife were left with Michael Setiawan’s young son, who was visiting for the weekend. The former officer’s ex-wife later picked up the child to return to their home in Bay Ridge.

Michael Setiawan was 12 when the family emigrated from Jakarta, Indonesia, in 1989 after winning the green card lottery. He is due to be arraigned Monday.

With reporting from The Associated Press.