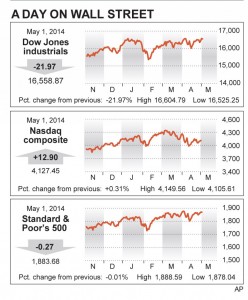 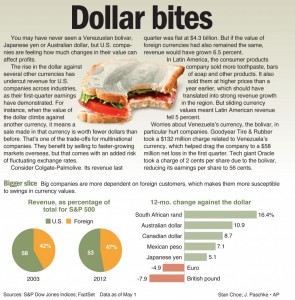 Encouraging news on the U.S. economy wasn’t enough to give the stock market its fourth straight day of gains.

Manufacturing grew faster in April than in March as exports picked up and factories accelerated hiring. U.S. shoppers ramped up their spending in March at the fastest pace in 4 1/2 years and construction spending also ticked higher. The reports, coming a day after the Commerce Department said U.S. growth stalled in the January-March quarter, suggest that the economy is gaining momentum after the unusually harsh winter.

The market remains close to its all-time highs, but for now investors, uncertain about which way the economy is headed, appear reluctant to push stocks higher.

“The data was good, but not robust enough to completely eliminate doubts over whether the first quarter was entirely weather-related,” said Anthony Valeri, an investment strategist for LPL Financial.

On Thursday, stocks moved between small gains and losses for most of the day as investors also assessed the latest round of company earnings and reports of a potential deal.

DirecTV climbed $3.16, or 4.1 percent, to $80.76 after The Wall Street Journal reported that AT&T had approached the company about a possible acquisition. A deal would likely be worth about $40 billion, the Journal reported. The report came after news Wednesday that power company Exelon agreed to buy Pepco Holdings for $6.8 billion.

In earnings news, Avon Products slumped $1.56, or 10.2 percent, to $13.72 after the beauty products company said its first-quarter loss widened, stung by volatile currency moves in Venezuela and weak revenue across all regions. Profit and revenue fell short of Wall Street expectations.

MasterCard and Yelp were among the companies that gained after reporting their latest quarterly earnings.

MasterCard rose 67 cents, or 0.9 percent, to $74.22 after the company reported that its net income climbed 14 percent in the first quarter as more spending by cardholders worldwide lifted the company’s results.

Yelp rose $5.70, or 9.8 percent, to $64.02 after the company said late Wednesday that its first-quarter loss narrowed as more local businesses signed up for the online review site’s services. The results were better than the market expected, and the company raised its revenue guidance for the year.

Overall, the trend in U.S. company earnings has been steady, if not spectacular, improvement.

“There’s a lot of noise around the trend, but the trend is positive … Earnings are coming in OK, and that makes me happy,” said Karyn Cavanaugh, senior market strategist at Voya Investment Management. “Investors need to get into this market.”

Treasury prices rose. The yield on the 10-year Treasury note fell to 2.61 percent from 2.65 percent, and is close to its lowest level of the year.

This article appeared in print on page 8 of the May 2nd, 2014 edition of Hamodia.