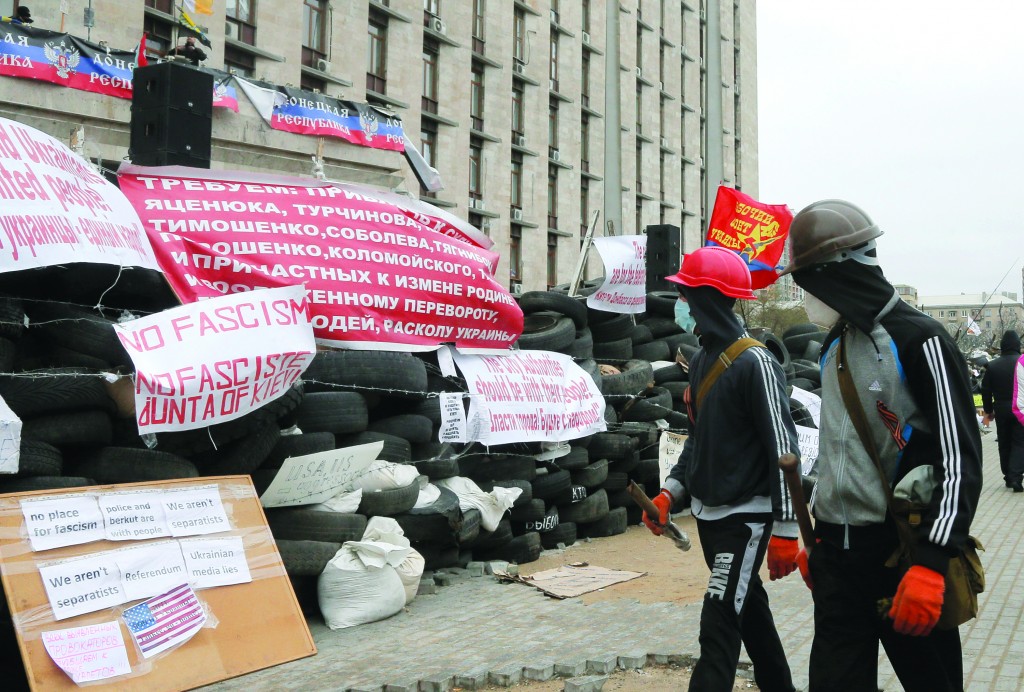 Moscow calls the detention center under construction near the Russian border a “fascist concentration camp.” Inside the barbed-wire fences, the reality is less ominous: It’s an EU-funded project to hold asylum seekers and illegal immigrants, similar to other such detention centers across Europe.

The accusation is part of a relentless Kremlin-driven propaganda offensive that uses World War II-era terms and imagery to rail against Ukraine’s fledging government. “Nazis,” “fascists” and “Fritzes” are some of the terms that Russia is hurling at Ukrainian authorities who took power after the ouster of the last elected president, a reversal in political fortunes that has led to a pro-Western Ukrainian government in Kiev and a pro-Russian insurgency in the country’s east.

It’s an effective tactic because of the emotional weight that World War II has in Russia. The Soviet victory against Hitler is the nation’s single most powerful rallying cry. In evoking the ugliest words related to Nazi Germany, the Russian media loyal to President Vladimir Putin is galvanizing support for his aggressive stance toward Ukraine, both among his countrymen and among Russian-speakers in Ukraine’s east.

It’s also a dangerous tactic, because the inflammatory propaganda may provoke the anti-Kiev opposition in the east.

By invoking World War II imagery, the Kremlin is stirring a cauldron of emotion; millions of Russians were killed in battle or thrown into Nazi camps in a war that left no family unaffected.

“The only thing that truly unites the nation is the mythology of the Second World War and the idea of victory,” said political analyst Dmitry Oreshkin. “Putin appeals to that; there’s nothing else to rally around.”

When Nazi troops entered Ukraine in 1941, they enlisted local Ukrainians to fight for them and against the Soviet Union. The nationalist Ukrainian brigades that were formed saw themselves as patriots fighting for independence. But while serving under the Nazis, some participated in war crimes, including extermination campaigns against Jews, Poles and fellow Ukrainians. Even after the fall of Nazi Germany in 1945, bands of Ukrainian nationalists fought on in the forests against the Soviet re-occupation of Ukraine until finally subdued or annihilated by around 1948.