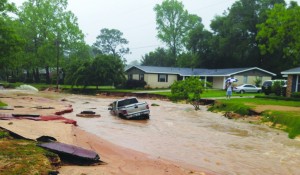 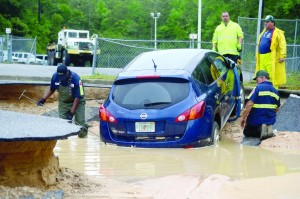 People were plucked off rooftops or climbed into their attics to get away from fast-rising waters when nearly two feet of rain fell on the Florida Panhandle and Alabama coast in the span of about 24 hours, the latest bout of severe weather that began with tornadoes in the Midwest.

In the Panhandle on Wednesday, roads were chewed up into pieces or wiped out entirely. A car and truck plummeted 25 feet when portions of a highway collapsed. Cars were submerged or overturned and neighborhoods were inundated, making rescues difficult for hundreds of people who called for help when they were caught off guard by the torrential rains.

Boats and Humvees zigzagged through the flooded streets to help stranded residents. At the height of the storm, about 30,000 people were without power. One woman died when she drove her car into high water, officials said.

Kyle Schmitz was at home with his 18-month-old son Oliver on Tuesday night when heavy rain fell during a 45-minute span in Pensacola. He gathered up his son, his computer and important papers and decided to leave.

“I opened the garage and the water immediately flowed in like a wave,” he said. “The water was coming up to just below the hood of my truck and I just gassed it.”

Schmitz and his son made it out safely. He returned Wednesday to assess the damage at his rented home in the East Hill neighborhood. The water was up to his shins.

In Alabama, Capt. David Spies of Fish River/Marlow Fire and Rescue said he was part of a team who found two women and a young boy trapped in the attic of a modular home.

Spies said they received the first call of help before midnight Tuesday but they couldn’t find the group until about 8 a.m. Wednesday. By then, the water was 2 feet below the roof. A firefighter used an axe to punch a hole through the roof and free them.

About 22 inches of rain fell in Pensacola — one-third of what falls in an entire year. National Weather Service officials were still sorting out official numbers because equipment that serves Mobile, Ala., and Pensacola lost power during the storm.

Meteorologist Jeffrey Medlin said what they had recorded officially — more than 11 inches — would be the fourth highest total for a calendar day since 1879.

Medlin said flash flood warnings were issued as early as Friday. Still, many people were caught unaware because the rain happened so fast.

The widespread flooding was the latest wallop from a violent storm system that began in Arkansas and Oklahoma and worked its way South, killing 37 people along the way, including the 67-year-old driver in Florida.

Over the past four days, the system created 65 tornadoes and slammed Arkansas’ northern Little Rock suburbs and the Mississippi cities of Louisville and Tupelo. Arkansas had 15 deaths; Mississippi had 12.

This article appeared in print on page 1 of the May 1st, 2014 edition of Hamodia.