Economic Growth Slows to a Crawl in First Quarter 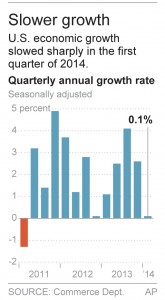 The American economy barely grew in the first quarter, as the harsh winter weather appears to have knocked business investment and other activity even harder than previously thought.

The Commerce Department said Wednesday that the economy expanded at a mere 0.1 percent annual pace in the first three months of the year, one of the weakest rates of growth in the nearly five-year-old recovery.

The bigger-than-expected slowdown – analysts had forecast growth of about 1 percent on average – put a halt to the momentum that had built up last year. Gross domestic product, the broadest measure of economic activity, rose at a solid 3.4 percent annual rate in the second half of last year.

Economists, however, are expecting growth to turn back up in the current quarter and strengthen as the year progresses.

Even with the frigid weather affecting home-building and sales of cars earlier this year, Wednesday’s report showed consumer spending slowed only modestly from the fourth quarter, thanks to stronger outlays for health care and other services.

“As the weather has returned to seasonal norms, we have already seen a marked improvement in the monthly data for March, which suggests that there will be a big rebound in second-quarter GDP growth,” said Paul Ashworth, chief U.S. economist at Capital Economics.

After a long period of modest and choppy recovery, many analysts think the economy could see robust growth this year as government cutbacks and political turmoil have receded, and households are better positioned to spend more, with their debts pared down, credit a little more available and the housing and stock markets having added to their wealth.

Still, there are uncertainties, particularly related to business investment. Although home construction is likely to pick up speed, company spending for equipment, which fell in the first quarter, has continued to lag.

Moreover, the outlook for trade is hazy. China’s economic reforms remain bumpy, and geopolitical tensions have added to the risks of a global economy in which Europe is growing only modestly and developing economies have slowed.

In the end, much of what happens to American economic growth is likely to come down to jobs and incomes.

Like the broader economy, job growth weakened early in the winter, but now appears to be returning to the moderate pace of the last couple of years. The government’s jobs report for April will be released Friday.

Incomes are showing signs of picking up, but only slightly, as unemployment is still high and competition for jobs remains stiff.

“Nobody’s going to their bosses and saying, ‘Give me a raise or else!’ ” said Scott Hoyt, an analyst at Moody’s Analytics. “Because they’re petrified they’ll say, ‘Or else.’ “

This article appeared in print in the May 1st, 2014 edition of Hamodia.