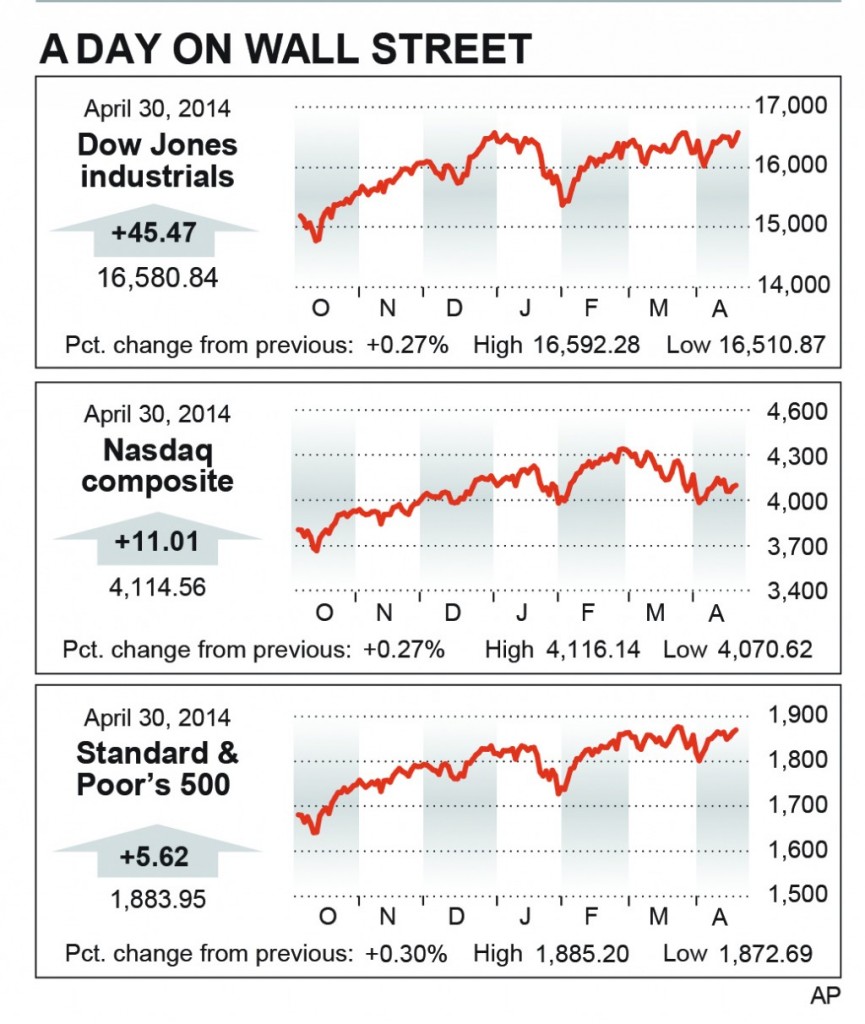 The Dow Jones industrial average closed at an all-time high Wednesday as the good narrowly outweighed the bad for the stock market.

After investors took in some solid U.S. company earnings, the latest move from the Federal Reserve and a report of unexpectedly weak economic growth in the first quarter, the stock market managed its third straight day of gains.

The Dow Jones industrial average rose 45.47 points, or 0.3 percent, to 16,580.84, four points above its previous record set on Dec. 31. It was the first day the index closed in positive territory for the year.

Some solid earnings reports and corporate deal news helped offset the weak economic report, and by midday stocks had eked out small gains.

Pepco Holdings surged $3.97, or 17.4 percent, to $26.76 after it agreed to be acquired by nuclear power company Exelon for $6.83 billion, creating a large electric and gas utility in the mid-Atlantic region. Exelon will pay an 18 percent premium to the company’s $23.10 closing price on Tuesday.

Sealed Air rose $1.72, or 5.3 percent, to $34.31 after the food packaging company’s earnings easily beat Wall Street’s expectations. The company also said it was on track to post full-year earnings at the upper end of the range of its forecast.

60 percent of S&P 500 companies have reported first-quarter earnings. Analysts currently expect earnings to grow by 1.7 percent in the period, according to S&P Capital IQ data. That compares with growth of almost 8 percent in the fourth quarter and 5.2 percent in the same period a year ago.

Stocks climbed higher in afternoon trading after the Federal Reserve’s statement following its April policy meeting was in line with investor’s expectations.

“What else are you supposed to do with your money?” Kelly said. “For lack of something better to do with it, money is going to move back into equities.”

— Twitter fell $3.65, or 8.6 percent, to $38.97 after its customer growth disappointed investors when it reported quarterly results late Tuesday. Twitter had 255 million monthly users at the end of March, up 25 percent from a year earlier, but 2 million fewer than industry analysts had expected. Twitter shot higher after its IPO at $26 a share in November, climbing as high as $73.31 in December. The stock has been steadily declining since then.