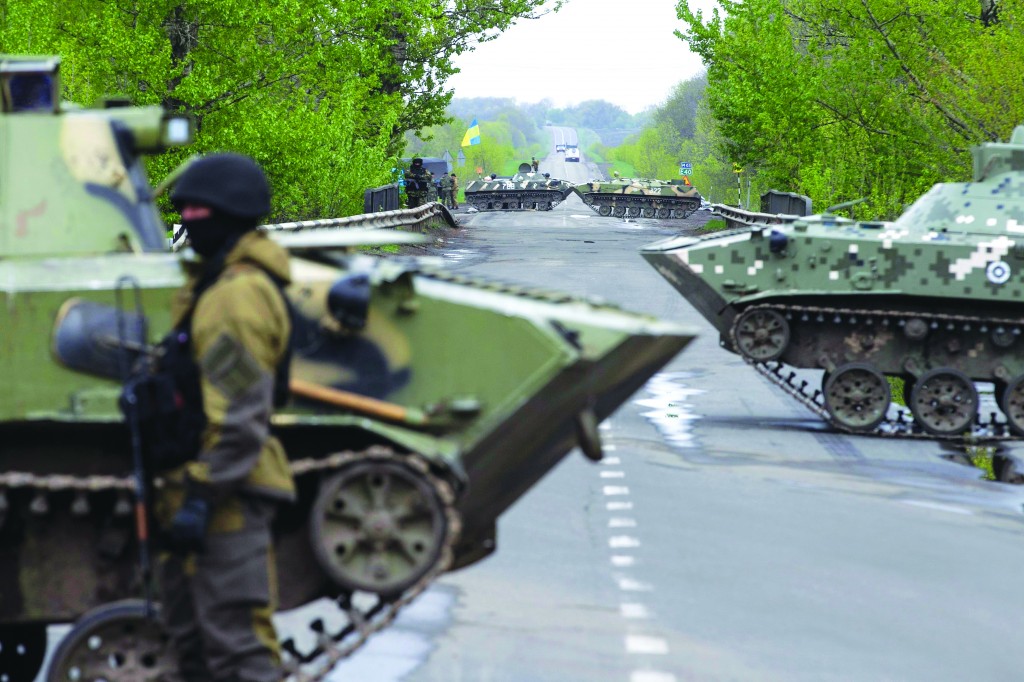 Hundreds of pro-Moscow separatists stormed government buildings in one of Ukraine’s provincial capitals on Tuesday and fired on police holed up in a regional headquarters, a major escalation of their revolt despite new Western sanctions on Russia.New U.S. and EU sanctions packages, announced with fanfare, were seen as so mild that Russian share prices rose in relief. A small number of names was added to existing blacklists, while threats to take more serious measures were put on hold.

Demonstrators smashed their way into the provincial government headquarters in Luhansk, Ukraine’s easternmost province, which abuts the Russian border, and raised separatist flags over the building, while police did nothing to interfere.

As night fell, about 20 rebel gunmen opened fire with automatic weapons and threw stun grenades at the headquarters of the region’s police, trying to force those inside to surrender their weapons, a Reuters photographer at the scene said.

“The regional leadership does not control its police force,” said Stanislav Rechynsky, an aide to Interior Minister Arsen Avakov, referring to events in Luhansk. “The local police did nothing.”

The rebels also seized the prosecutor’s office and the media broadcast center.

The separatist operation in Luhansk appears to give the pro-Moscow rebels control of a second provincial capital. They already control much of neighboring Donetsk province, where they have proclaimed an independent “People’s Republic of Donetsk” and declared a referendum on secession for May 11.

The rebels include local youths armed with clubs and chains, as well as “green men” — heavily armed masked men in military uniforms without insignia.

Adding control of Luhansk would give them sway over the entire Donbass coalfield — an unbroken swath of territory adjacent to Russia — where giant steel smelters and heavy plants account for around a third of Ukraine’s industrial output.

It is the heart of a region that Putin described earlier this month as “New Russia,” reviving a term from when the tsars conquered it in the 18th and 19th centuries. Most people who live in the area now identify themselves as Ukrainians but speak Russian as their first language.

Ukraine, a country of 45 million people the size of France, has a thousand-year history as a state but has spent much of the last few centuries under the shadow of its larger neighbor. It emerged as a modern independent nation after the Soviet Union broke up in 1991, with borders drawn up by Bolshevik commissars from territory previously ruled by Russia, Poland and Austria.

Its current crisis erupted after a pro-Russian president was toppled in February in a popular uprising. Within days, Putin had declared the right to use military force and dispatched his undercover troops to seize Crimea.

The United States and European Union accuse Moscow of directing the uprising with the intent of dismembering Ukraine.

“Today, Russia seeks to change the security landscape of eastern and central Europe,” U.S. Secretary of State John Kerry said in a speech on Tuesday. “Whatever path Russia chooses, the United States and our allies will stand together in our defense of Ukraine.”

Nevertheless, U.S. and European officials have repeatedly made clear they will not consider military action.

The U.S. embassy in Kiev described the behavior of pro-Russian activists — who also attacked a rally of Kiev supporters on Monday with clubs and iron bars, and are holding dozens of hostages including seven unarmed European military monitors — as “terrorism, pure and simple.”

But so far they have shown no sign of restraining the Kremlin leader, who overturned decades of post-Cold War diplomacy last month to seize and annex Ukraine’s Crimea Peninsula and has since massed tens of thousands of troops on the frontier. Russia has openly threatened to invade to protect Russian speakers, though it denies that it plans to do so.

Putin threatened on Tuesday to review the role of Western firms in Russian energy deals.

“We would very much wish not to resort to any measures in response. I hope we won’t get to that point,” Putin told reporters after meeting leaders of Belarus and Kazakhstan.

“But if something like that continues, we will of course have to think about who is working in the key sectors of the Russian economy, including the energy sector, and how.”